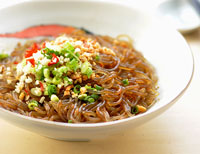 In 1506 AD, the first Portuguese sailing ships – led by Columbus’ cousin – reached China, and then more and more European ships came. These European ships brought (among other things) many new foods to China. So Qing Dynasty Chinese food was different from the food of medieval China.

What new foods came to China?

Chinese people already knew about European food, but the traders brought new foods from Central America and South America. The traders tried selling coffee (from Africa), chocolate, potatoes, sweet potatoes, chili peppers, yuca, peanuts, and corn. Chinese cooks weren’t that interested in potatoes or coffee or chocolate, but in southern China (and Southeast Asia) people really took to chili peppers and sweet potatoes, and they also started to eat yuca, corn, and peanuts (though not as much as sweet potatoes).

Chinese farmers liked sweet potatoes because there were too many people for every family to farm down in the valleys. Poorer families had to live up in the mountains, where it was too cold and dry to grow rice. Sweet potatoes grew well up in the hills, so by the 1600s many poor Chinese farming families lived almost entirely on sweet potatoes. They didn’t cook them the same way that people did in South America, though – Chinese cooks often made sweet potatoes into noodles or little cakes, so they would be more familiar.

How did they cook corn?

People also grew corn in places where wheat wouldn’t grow. Mostly Chinese people ate corn the way Native Americans did, boiled into corn mush (which we call grits or polenta), with vegetables on top. This mush was like the millet or rice mush they were used to. Chinese cooks mashed peanuts and mixed them with water and soy sauce to make peanut sauces for noodles like the dishes you can get at any Thai restaurant today.

What about northern China?

In Northern China, it was too cold, and the growing season was too short, to grow tropical plants like these, and so people kept on eating millet, wheat, rice, and tofu as they always had. But their habits changed too: they used stir-frying more than before. And all over China in the 1600s AD, people were beginning to eat three meals a day instead of two (just as they were in northern Europe at the same time).

Did you find out what you wanted to know about Qing Dynasty Chinese food? Let us know in the comments!