Where does millet come from? Sudan, China, Europe 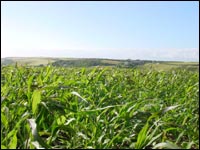 A field of millet

Millet is a kind of grain that grows wild in Africa and all across Europe and Asia. It grows about fifteen feet tall, like corn on the cob (it looks kind of like corn when it is growing, too). Millet grows fast, and doesn’t need very much rain, so it’s a good crop for dry or cold climates. It will grow in places where wheat and barley will not grow. Also, millet is easy to store. You can keep it up to five years. So it’s good for places that have long winters or often have droughts.

History of wheat
History of barley
Where do oats come from?
Where does corn come from?
How about rice?
Early Chinese food
All our China articles 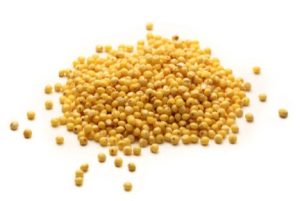 A pile of millet seeds

There are three different kinds of millet, and people started farming the three kinds independently. The first kind was broomyard millet, which grew wild in China, and hunters and gatherers in early China probably ate millet.

People have been farming broomyard millet in Northern China since about 8,000 BC. Northern China was dry and cold, so it was a good place to grow millet. By around 5000 BC, people in north-central China were relying on millet as a staple food, and by about 3000 BC millet was a staple food all over northern China. The sign for millet is common in Chinese writing, where the signs for “millet” and “mouth” put together mean “good”, and the signs for “millet” and “man” together mean “harvest” or “year”.

The second important kind of millet is pearl millet. It grows wild in the Sudan (south of the Sahara Desert) in Africa. By 4000 BC, people in the Sudan were farming pearl millet, and from there pearl millet spread to East Africa and then to Egypt by around 3000 BC. The Egyptians made a flat bread like pita bread out of pearl millet. From East Africa millet also spread to India, where people were farming it by about 2500 BC. The Harappans also used millet to make roti, a kind of flatbread like pita bread. 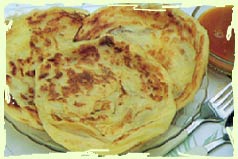 A third kind of millet – also called “panic” – grew wild in West Asia and Europe. Around 4000 BC, lake-dwelling Europeans were farming that millet, and by 3000 BC Sumerians in West Asia were also growing millet.

By the 100s BC, people in West Asia and Europe were growing both the native “panic” millet and the Chinese broomyard millet. Some people liked one better, and some people liked the other.

But in the southern Mediterranean, people were still eating African pearl millet, and pearl millet also spread from Eastern Africa south down the coast and became more and more common in southern Africa too. By this time, people in China were making wine out of broomyard millet, while in Africa, people made beer out of pearl millet.

Try this millet for yourself!

How did people cook millet?

People in Europe about this time usually ate millet boiled in water or milk like oatmeal or polenta. In the Roman Republic, people called this puls, and it was the most common food of really poor people. Medieval Europeans and northern Chinese people kept on eating millet porridge (Medieval Europeans called it groats), but around 1000 AD, North African people started making their millet into couscous instead of porridge, maybe imitating rice.

Where do people eat millet today?

As people in Europe, West Asia, and China got richer, they gradually stopped eating millet; in America today, we use millet mainly for birdseed. Today even in North Africa, most people make couscous out of wheat instead of millet. But in poorer countries, especially if it is very dry and hot, people still eat a lot of millet. Mostly that’s in Mali, Nigeria, Niger, and India, where people eat pearl millet. Even in India, though, these days more and more millet goes to feed animals instead of people.

Bibliography and further reading about millet:

Food, by Fiona MacDonald and others (2001). Easy facts about food from all over the world. A little preachy.