People in T’ang Dynasty China made the first playing cards, about 800 AD. They used their new material, paper, to make the cards, and they called their game “the leaf game“. The emperor’s daughter, Princess Tongchang, played cards with her husband’s family in the 800s AD, and maybe the “leaf game” was originally a woman’s game. Another T’ang Dynasty woman wrote a book about card games, the Yezi Gexi.

These early cards may have been paper representations of earlier bone or wood tiles that showed the possible combinations of dice, like dominoes, or they may have been actual paper money used in a game. Maybe the Chinese invention of wood-block printing about 650 AD led to the invention of playing cards. 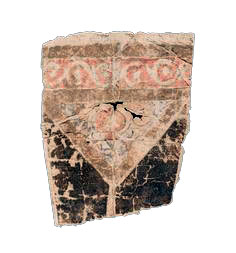 By the time playing cards left China, maybe around 900 AD, they were already divided into four suits, and card games already involved taking a certain number of tricks. But there were only 32 cards in a pack. Around this time, people began playing cards in Iran and India too, probably taught by Chinese traders on the Silk Road. The shape of the cards varied – Indians liked circular cards – and so did the number of cards and the number of suits. In Iran, most decks had eight suits, with twelve cards in each suit, and the top two were the King and Vizier. 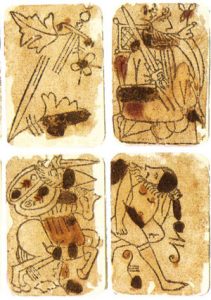 Playing cards reached Fatimid Egypt by around 1000 AD. By the 1400s, medieval Islamic cards had 52 cards in a deck, in four suits – polo-sticks, cups, swords, and coins. The top cards were the King, the Vizier, and the Second Vizier. From Egypt (or possibly through Spain) playing cards reached Europe in the 1300s AD. In Europe, the polo-sticks became regular sticks, and cards quickly spread north and west, all over Europe. Governments passed laws banning card-playing, but people played anyway.

At first Europeans hand-painted their cards, but these were expensive, and soon they learned to use wood-block printing as Chinese card-makers did. In Europe, some people added a fifth suit called the Triumph, or Trump, which ranked higher than the other four; other players just chose one of the regular four suits to be Trump. By the 1400s, the four suits were the modern hearts, clubs, diamonds and spades, though Spanish decks still use cups, coins, clubs, and swords, and Spanish decks mostly have only 40 cards. Around the same time, the Knave (or Jack) and Queen came in, and the Ace moved to the top of the suit. 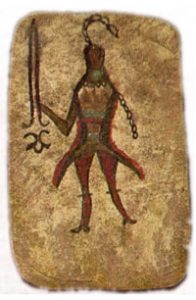 Europeans in turn brought playing cards to the Americas and to Japan in the 1500s. When Japan’s shoguns forced Japan to shut itself off from the rest of the world, Japan developed its own tradition of playing cards, very different from everybody else’s. South Americans, Mexicans, Navajo, Pueblo, Ute, and Apache people learned to play cards with the Spanish deck, sometimes making their cards out of deerskin or sheepskin.

Along the Atlantic coast, people played with the English deck, but the Puritans, like Islamic and European authorities, tried to ban gambling and cards. High taxes on cards were one of the things American objected to that led to the American Revolution, and then to American card-printing companies.

Learn by doing: play a game of poker or gin or bridge
More about backgammon
More about Chinese games

Bibliography and further reading about the history of playing cards: