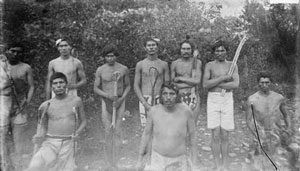 People who lived in North America played both active games and the kind where you can sit down. Their favorite active game was lacrosse. Or actually lacrosse and a lot of other games that you play with a stick and a ball, with rules that were different in different parts of the country.

In lacrosse, as in soccer, the most basic rule is that you can’t touch the ball with your hands. You pick the ball up with a net on the end of a stick and use the stick to throw the ball. People played lacrosse mainly in the eastern half of North America, mostly in the Southeast and the Midwest around the Great Lakes. This would be the land of the Cherokee, the Choctaw, the Chickasaw, the Iroquois, and the Ojibwa.

One way that lacrosse was different in different places was that they used different sticks. The Cherokee and Choctaw, and people living near them in the Southeast, used two sticks, one for each hand, and they picked up the ball by pinching it between the two sticks. The Ojibwa used a stick with a hard wooden cup at the end. The Iroquois used the stick we know today, with the net at one end to catch the ball. 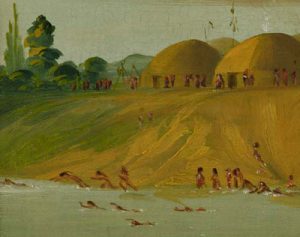 Many Native Americans also liked to swim. Most Native people spent a lot of time on the water, fishing or gathering shellfish, and Native children learned how to swim as soon as they learned to walk.

Another active game that Mississippian people liked was “chunkey”. To play this, one person throws a big stone disk (like a hockey puck) and then you tried to throw your spear closest to where the disk was going to roll.

People also played the kind of game where you can sit down. All across North America people tossed flat sticks the way Eurasians threw dice to play games with. Inuit people played a game where each player gets a bag of small seal bones and the winner is the one who can assemble his bones into the right layout for a seal’s flipper in the shortest time. It’s kind of a jigsaw puzzle contest, but also a game of chance, because you don’t necessarily get all the bones you need in your bag.

Learn by doing: play the Inuit game with paper pieces
More about American swimming
American games after the Europeans invaded