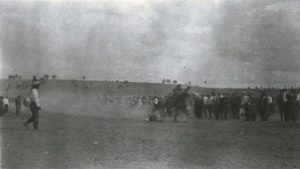 The first important change in the history of American games after 1500 AD came with the horse. Many Native American groups like the Ute people got horses and learned to ride them. So young men and women began to race their horses. Soon horse-racing on tracks, and gambling on horse races, were very popular ways to spend time. Both men and women also kept on playing traditional games like lacrosse. European settlers also learned to play Native games. 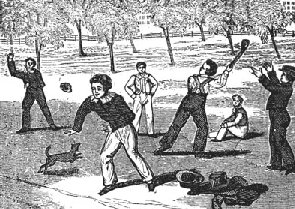 How did baseball get started?

By the 1800s AD, the European settlers began to make up new games of their own. In the late 1700s, the English game of “rounders” turned into the American game of baseball. Our earliest record of it is a law passed in western Massachusetts in 1791. The law said that nobody could play baseball near the new meeting house. They might break the windows!

In 1845, Alexander Cartwright printed up a list of rules for baseball. He got everyone to agree to play by pretty much the same rules. The game spread all over the United States when northern soldiers played baseball wherever they were sent during the Civil War.

Around the same time, in the 1820s, people in England started to play soccer (which they called football). And then in 1823 they also began to play the rougher game of rugby. These two games came over to America with immigrants from England. In America, they got some different rules. We call them football, or American football. Football took off slowly, but by the 1860s many college students played football. Football was especially popular at Eastern colleges like Princeton, Rutgers, and Harvard. Many young men were getting hurt during these games, and even killed. So the colleges set up a committee to make some rules so people wouldn’t get hurt so much. That was in 1905. 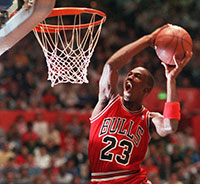 The invention of basketball

Basketball came along much later than baseball and football. In 1891, Dr. James Naismith, who was a physical education teacher, wanted a good game for kids to play inside during the winter. (He lived in the state of Massachusetts, where the winters were long and very snowy and cold.).Naismith didn’t want his game to take up too much space. So he wrote down the rules for basketball. Soon people were playing it all over the United States.

Fighting to let people of color and women play sports

Even after slavery ended, all through the first half of the 1900s, white people wouldn’t let black people play in the same games with them. There were black baseball and football leagues alongside the white ones. Organizers also only allowed men on the teams, and not women. By 1946, a few black men got on to white football teams. In 1947, Jackie Robinson was the first black man on a white baseball team. In 1950, black men finally got on white basketball teams.

When black people finally could join white teams, a lot of them took advantage of this opportunity. White people wouldn’t hire black people for most good jobs. So professional sports became one of the few ways for black men to make a lot of money. 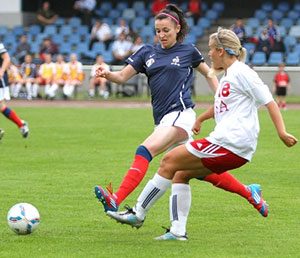 Women didn’t get to play sports much until the 1970s. Then women fought to get help from the United States government. The government forced public schools and colleges to provide equal sports time for boys and girls. But even today, there still aren’t any women on men’s professional sports teams.

When did soccer become a thing?

Until the 1970s, hardly anybody in North America played soccer, even though soccer was very popular in the rest of the world. Then boys and girls began to play soccer, and now it is becoming more and more popular.

How can we include everybody in our games?

Even more recently, people with disabilities and trans people have been fighting for the right to play sports too. From the Paralympics to accessible playgrounds, people now realize that everyone needs a chance to play games and move their body, no matter what they look like or what challenges they face.

Did you find what you needed about the history of American games? Let us know in the comments.

Learn by doing: join a team and play some baseball, basketball, football or soccer
More about swimming
History of board games

Bibliography and further reading about the history of American games: