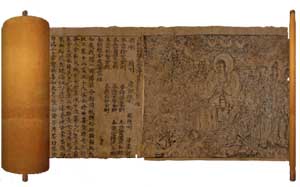 For four thousand years after the invention of writing in Iraq, all writing was done by hand, a character at a time. When people needed a copy of a scroll, they had to pay a scribe to copy it out for them. Of course this made scrolls very expensive. So only the richest people could have scrolls.

Then someone invented a faster method: printing. The history of printing starts when somebody in Tang Dynasty China, about 650 AD, had the idea of carving wooden blocks with a page of text. Then you could ink it and press paper on the block to print a page. The oldest printed scroll we know of – some Buddhist sayings – comes from north-west China. It was printed about 700 AD. Uighur printers used this method for their Manichaean texts in the later 700s. By about 800, Chinese printers also used wood-blocks to print the first playing cards.

(More about the history of playing cards)

Wong Jei’s scroll was printed in 868 AD. It’s also a Buddhist holy text, like the Bible is for Christians. People in China who were Buddhists believed that copying out these texts would bring you merit, like good luck. Wong Jei printed this scroll for his parents, to bring them merit. 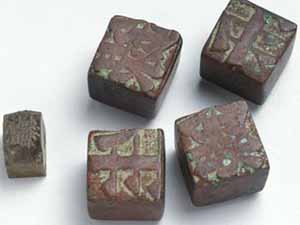 Wong Jei’s scroll was block printed – the whole page carved together. But by the 1000s AD a new West Asian idea had come east to China: people began to make books instead of scrolls.

Books were easier to copy, and easier to use for research. You could have them open to two pages at once, or mark your place with a bookmark.

To work better with the new book format, an alchemist named Pi Sheng in China invented the more flexible system of movable type – carving each Chinese character separately on small fired clay blocks and arranging them to make words, so that the same blocks could be reused to make many different texts. But there are so many characters in Chinese writing that movable type printing was still pretty hard, and it didn’t really catch on. 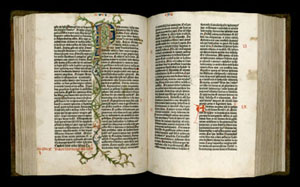 History of printing: a Gutenberg Bible

Not long after block printing was invented in China, it spread west to the Mediterranean. Islamic scholars were block printing good-luck charms like this round one, and religious texts, by the 800s AD. 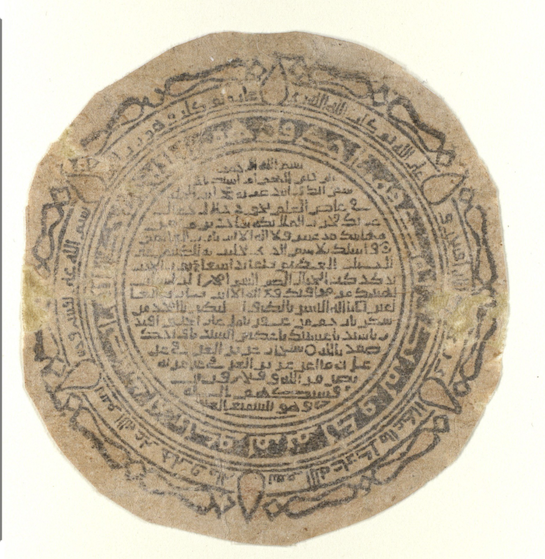 Block printing reached the Eastern Mediterranean in the 800s AD, not long after it started in China. This one is from the 1000s, probably from Egypt.

Around 1200 AD, people in Europe learned how to make paper for themselves instead of buying it from Egyptian manufacturers in Africa.

(Read more about the history of paper.)

Newly enthusiastic about books and printing, they gradually worked out how to use movable type made out of metal, which worked better than the old clay type. They used a mixture of lead, tin, and antimony.

Moveable type and the alphabet

Printers in Europe had seen Chinese and Islamic block printing, and Chinese movable type come across the Silk Road. But they recognized that movable type would be far more useful in the West, where people used an alphabet, than for the logograms of Chinese.

(Read more about the history of the alphabet)

Also, because the Medieval Warm period had made northern Europe richer, many more people in Europe knew how to read, and might buy books.

Why was Gutenberg’s Bible important?

In the 1400s AD, Gutenberg used movable metal type made from a mixture of lead, tin, and antimony to print a Christian Bible. This combination of many new technologies – Chinese paper and movable type with West Asian books and the alphabet, and the large number of people in Europe who knew how to read – led to an explosion of much cheaper printed books in Europe.

Bibliography and further reading about the history of printing: