Were families important in ancient China?

Most people in ancient and medieval China thought families were very important. Kids often lived not just with their parents, but also with their grandparents, their aunts and uncles, and their cousins. Richer people also lived with enslaved workers or paid servants.

How did people treat children?

People took good care of their children. They carried babies and toddlers all the time. They gave babies good pieces of food. Rich people had wet nurses and nannies for their kids.

What is a wet nurse?
Schools in ancient China

But if your family wasn’t rich, all the strong adults and teenagers in the family had to go out to work in the fields or silk factories during the day. Then the children had to stay with their grandparents or an old aunt, or with their older sisters or brothers. When they got older, they had to work. 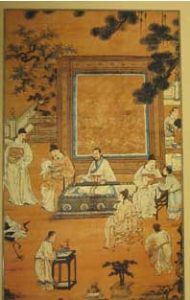 A school in medieval China

After you got married

Boys in China often kept on living with their families even after they grew up, spending their whole lives living in the same house. But girls, when they grew up, got married and went to live in their husband’s house. The girls had to do whatever their mothers-in-law told them to do.

Most people thought that it was very important to respect old people. The oldest people in the house continued to be in charge until they died.

Even after the old people died, people believed that their grandparents and their parents continued to exist as invisible spirits or ghosts watching over the family. People made altars so they could sacrifice to the spirits of their ancestors.

Religion in ancient China
What is sacrifice?

Everyone’s house had these altars, and everyone sacrificed to their ancestors. Otherwise the whole family would have bad luck.