History of dice – When were dice invented? 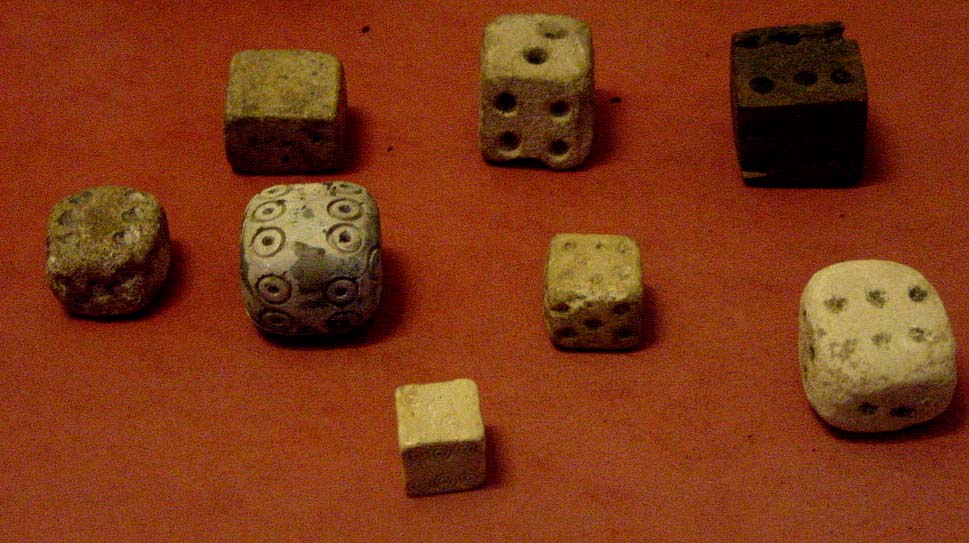 How old are dice?

People have been playing dice games for a very long time. The very first dice were just sheep knucklebones, and you won if it landed on the right one of the four flat sides. People have been throwing knucklebones since at least 5000 BC, in ancient Sumer.

When was chess invented?
How old are playing cards?
History of games
Ancient Mesopotamia articles

Then somebody cut off the rounded ends of knucklebones to make six-sided dice instead of four-sided ones, and then started to make dice out of wood or ivory. The earliest actual dice anyone has found come from Iraq and Iran, both from about 3000 BC.

What is ivory?
West Asian games
The Bronze Age

Later dice were made of bone or ivory (or wood or stone, but usually of bone), and they looked just like our dice today, with different numbers of spots on each side. Like ours, even the oldest dice almost always have the one opposite the six, the three opposite the four, and the two opposite the five. This is true all over Europe, Asia, and Africa.

Why don’t dice have numbers on them?

The reason they have spots instead of written numbers is that people have been using dice since long before they invented a way to write numbers. Because they were small and not very valuable, archaeologists often find ancient dice. 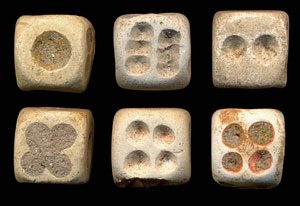 They also had a method where they threw small bundles of sticks, like our Pick-Up Sticks, and your score depended on how the sticks landed and how they were crossing each other.

In ancient India, people were certainly using cubic dice by the Harappan period, about 2000 BC. Sometimes people also used stick dice, like flattened toothpicks, which only have four sides. And sometimes they threw groups of cowrie shells, and your score depended on how many shells landed with their teeth facing up.

Where do beans come from?
Native American games

People often used these dice to gamble for things or for money. Archaeologists at the Roman city of Pompeii have even found dice which had been weighted on one side with tiny bits of lead to make them come up more often on a certain number. The lead was carefully hidden so the other players wouldn’t know that you were cheating!

Did you find out what you wanted to know about the history of dice? Let us know in the comments!

Learn by doing: play a board game with dice like Parcheesi
More about board games

Bibliography and further reading about the history of dice: