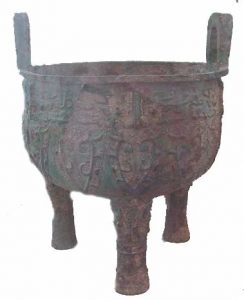 The first part of the Zhou Dynasty is called the Western Zhou, and it runs from about 1122 to about 722 BC. During the Western Zhou dynasty, art didn’t change very much from the Shang Dynasty that came before it.

(More about the Western Zhou)

People kept on making the bronze sacrificial jars and cups that they made under the Shang emperors. Often the shapes of the jars were more complicated than they had been before. 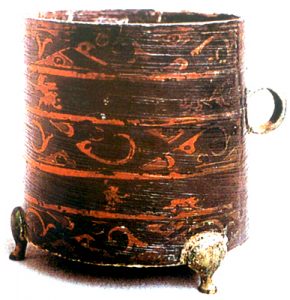 A lacquer box from the Zhou Dynasty

Then under the Eastern Zhou dynasty, beginning about 722 BC, people began to use these bronze jars and cups in their own houses, to show how rich and powerful they were, instead of only for the gods and their ancestors.

(More about the Eastern Zhou)

People made whole sets of cups that they could use at big dinner parties in their houses. Not very many of these new jars and cups had writing on them anymore. And they began to make other things out of bronze: bells, mirrors, belt-hooks, candelabras, and weapons, for example.

There were some new technical ideas about how to make the bronze jars during the Eastern Zhou period as well: for instance, artists began to make the designs on the jars using stamps. And the shapes of the jars became simpler again.

In the Eastern Zhou, most of the designs were abstract interlacing patterns, rather than animals. Artists began using gold and silver inlays to decorate their patterns and make them stand out more.

Eastern Zhou art: a Chinese woman with a phoenix bird (ca. 300 BC)

Towards the end of the Eastern Zhou period, about 300 BC, artists began to create the first Chinese pictures of whole scenes with several people and a landscape, often hunting scenes.

Probably Chinese artists saw earlier Central Asian hunting scenes and were inspired by them. The rise of the Silk Road in the 400s and 300s BC brought more Central Asian art to China.

Artists also kept on making jade ornaments and decorations, in complicated shapes with carving on them.

Pottery during the Eastern Zhou dynasty

Pottery techniques became more complicated too, with wheel-made pots being fired hotter (this makes them harder) and sometimes with a greenish glaze on the surface.

It was also in the Eastern Zhou period that people in China first began to make other kinds of art. Especially in southern China, people began to make things out of lacquer (LACK-urr), the colored red sap of the lac tree painted onto wood. You used lacquer to make beautiful light-weight boxes, dishes, and even small statuettes.

And at the end of the Eastern Zhou period, about 300 BC, people also started to paint scenes with people and landscapes onto silk. All of these new efforts may have been inspired by the new markets of the Silk Road – Chinese traders needed something they could sell on the Silk Road in order to buy West Asian glass, silver, and wool carpets. Perhaps most important, they wanted to buy Indian steel.

Go on to Qin Dynasty art

Art in China (Oxford History of Art Series), by Craig Clunas (1997). Not specifically easy reading, but a good introduction to the spirit of Chinese art. Warning: this one is not arranged in chronological order. Instead, it has chapters on sculpture, calligraphy, and so on.