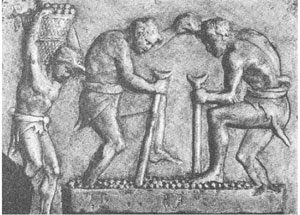 Wine-making started out pretty simple: you picked the grapes and put them in a big concrete box, and then barefooted people – usually enslaved people – got into the box and stepped on the grapes over and over until they were all crushed and their juice ran out of drains at the bottom of the box. 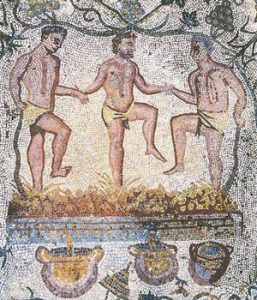 But by the time of the Persian Empire, commercial wine-makers used a heavy wine press to squeeze more juice out of the grapes. All across Europe and West Asia, wine-makers pressed grapes with long wooden beams, using a lever. You pressed the wooden beams down on the grapes by turning the windlass (a kind of pulley) to tighten the ropes. The juice from treading grapes with your feet gave the best wine, but you could make cheaper wine with the second pressing.

After the pressing, you poured the grape juice into big clay pots and let it sit for two weeks or a month, to ferment into wine. To make the wine less acid, winemakers sometimes added chalk or marble dust. To make the wine sweeter, they sometimes added honey, or even lead (which was not good for you). Then they poured the wine into smaller wooden barrels or pottery amphoras to transport and sell.

Around 300 AD, wine-makers in West Asia started to use a more efficient kind of press, which could get even more juice out of the grapes with less work. Instead of using a lever, this new kind of press used a wooden screw. But in Europe, people kept on using the old lever presses.

Learn by doing: crush some grapes to make fresh grape juice.
More about wine
More about the history of beer