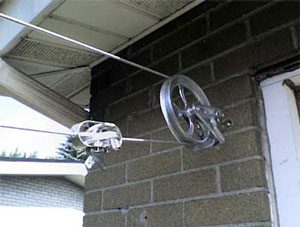 A pulley is really a kind of wheel, just as a screw is a kind of inclined plane. But pulleys are so important that people give them their own category. A pulley is a wheel with two raised edges. The raised edges are so that a rope or a string will run along the wheel without coming off.  We also call a pulley a block and tackle.

Because there are no wheels in nature, there are also no pulleys. Possibly Archimedes invented pulleys in ancient Sicily, about 250 BC. (But Archimedes gets credit for a lot of things that earlier people invented, just because we don’t know the names of earlier inventors. So maybe not.) Anyway somebody invented pulleys around that time.

As with a screw, you can use a pulley in several different ways. You can use a pulley to make it easier to pull a rope, or to change the direction of a force. Or a pulley can get you more mechanical advantage to lift something heavier than you can lift by yourself.

With a movable pulley, you do have a mechanical advantage. You can pull with less force for a longer distance to get the same work done. You’re using the pulleys to make the rope wind around longer, so you have a longer distance to pull, and need less force. This lets you lift things that would be too heavy for you without a pulley.