Who was Archimedes? Eureka! 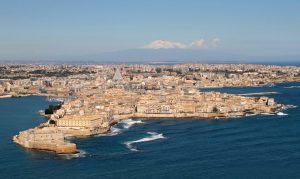 Archimedes was from Syracuse, Sicily. Here you see it with Mount Etna in the background

When did Archimedes live?

Archimedes was born about 287 BC, so he was a little younger than Euclid. Archimedes’ father was an astronomer, so he grew up knowing a lot about science and math.

Who was Euclid?
Greek astronomy
History of astronomy
Greek math and science
All our Ancient Greece articles

Where did Archimedes live?

Because Archimedes was related to the tyrant who ruled Syracuse, on the island of Sicily, he lived his whole life in Sicily.

Archimedes went to school in Egypt

But in order to become a great scientist, he had to leave Sicily for a while to study with really great teachers. He went across the Mediterranean Sea to Africa, to the University of Alexandria in Egypt. They taught classes in Greek there, so he could understand them.

More about the University of Alexandria

In Egypt, he probably met and worked with the other great scientists of his time: Euclid, Aristarchus, and Eratosthenes.

Who was Euclid again?
And Aristarchus?
Who was Eratosthenes?

What did Archimedes invent?

After Archimedes got back home to Sicily, he spent a lot of time inventing machines. Archimedes worked mainly in a losing battle to defend his city-state from the Romans, who were attacking Syracuse in the course of the First Punic War.

Archimedes invented, or people said he had invented, a bunch of different kinds of machines. The most important of these machines was the pulley. Another invention was the screw pump, which uses a screw to lift water from one place to another. (But the screw pump may well be earlier, too).

What did Archimedes discover?

But Archimedes was also interested in why things worked, and whether they would work the same way every time. He explained why levers worked, and he worked on getting a more accurate number for pi, and wrote a proof for calculating the circumference of a circle.

Proof of the circumference of a circle
What is pi?
How do levers work?

The accomplishment Archimedes himself was most proud of was that he proved that if you fit a sphere inside a cylinder, the sphere will have two-thirds the volume and two-thirds of the surface area of the cylinder. 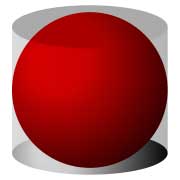 A sphere inside a cylinder

Archimedes also worked out a way to calculate the volume of an irregular object. With a regular cube, you can just multiply the lengths of all the sides. But what about the volume of a complicated necklace or a Greek vase?

The water in the bath

According to one story, Archimedes noticed that the water level of the bathtub rose when he got in, and he realized that you could measure volume by putting the necklace in a cup full of water and measuring how much the water level rose. (Supposedly he got so excited that he ran through the streets naked yelling Eureka!, which is Greek for “I figured it out!”)

The Archimedes Principle: why things float

Archimedes went on from his Eureka moment to figure out the Archimedes Principle, which explains why some things (like wooden logs and metal bowls) float and other things (like metal spoons or gold rings) don’t float. Any object will displace some water, and that water will weigh a certain amount. If the object weighs more than the water it displaces, it will sink. If it weighs less than the water it displaces, it will float.

Some of Archimedes’ work may be related to the work on infinity and combinations that Indian mathematicians were doing at the University of Nalanda around the same time. Archimedes did some work on infinity, getting close to developing calculus, that may be building on Indian work. Also like Indian mathematicians, Archimedes worked on the different ways numbers can be combined into patterns.

This may be related to Archimedes’ effort to work with very large numbers, trying to figure out how many grains of sand it would take to fill up the universe. To do this, Archimedes worked with exponents, and proved that Xa x Xb = Xa+b.

How big is the universe really?
What is a light-year?

How did Archimedes die?

Archimedes died when the Romans were conquering Syracuse; according to the story, a Roman soldier killed him (even though the commanders had ordered the soldiers to capture the great man alive).

Learn by doing: put things in water and see if they float, and discuss why
More about Roman science

Bibliography and further reading about Archimedes:

Greek and Roman Science, by Don Nardo (1998). Nardo has written a lot of good easy reading books about the ancient world; this one is no exception.