Proof for circumference of a circle

Will this formula work every single time?

Proving that the formula for the circumference of a circle is always true is harder than just figuring out that it is true. Now we need to show that C=2πr is always true for every possible circle.

How Archimedes proved it

Who was Archimedes?
Greek math and geometry
Egyptian math and science 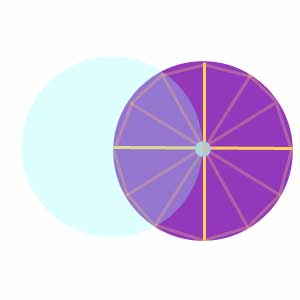 More of the proof

Now extend all of the radius lines so they become diameter lines, all the way across the circle, and finish drawing all of the triangles to connect them. You’ve got six equilateral triangles now, that make an orange hexagon. So the perimeter of your hexagon is the same as six times the radius of your circle.

What’s a diameter?
What’s a hexagon?
What’s the perimeter?

(Now pi comes into it)

Now let’s try to get a little closer to the real value of π. Suppose we make our triangles narrower, so that instead of drawing a hexagon, we draw a dodecagon – a shape with twelve sides? We can do that by drawing more points halfway between the points of the hexagon.

Getting the hexagon to be more like a circle

Perimeter of a dodecagon

We know that the line AC is the same as the radius of the circle – let’s say the radius is 4. It’s also the hypotenuse of the bluish right triangle ADC.

We also know that the line AD is the same as half the radius of the circle (remember the hexagon was made of equilateral triangles), so AD = 2. Because the bluish triangle is a right triangle, we can use the Pythagorean Theorem to tell us that the third side, CD, is the square root of 12. (4 squared = 2 squared + 12).

Or you can get the same proof from this video

The more sides, the closer to pi

The more sides we draw on our polygon, the closer we will get to the real value of pi (3.14159 etc.). Using a polygon with 96 sides, Archimedes was able to calculate that π was a little bigger than 3.1408, which is pretty close.