Who was Pythagoras? Greek Mathematics 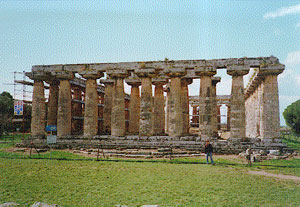 Near where Pythagoras lived: Doric temple at Paestum, Italy

Pythagoras lived in the 500s BC. He was one of the first Greek mathematical thinkers that we know about, after Thales.

Who was Thales?
All about Greek mathematics
Lots of articles about ancient Greece

Pythagoras spent most of his life in the Greek colonies in Sicily and southern Italy. He had a group of followers. They were his disciples, just as Taoists followed Lao Tzu, or Buddhists followed the Buddha.

Where did Taoism come from?
When did Buddhism get started?

Pythagoras’s followers learned from him and taught other people what he had taught them. Like Lao Tzu and the Buddha, Pythagoras was probably rich enough not to have to worry about money. He had plenty of money, thanks to the unpaid work of enslaved people and colonized people around him.

The Pythagoreans were known for their pure lives. They didn’t eat beans, for example. They thought beans were not pure enough. Like Buddhists and Zoroastrians at the same time, Pythagoreans questioned whether it was ever right to kill animals, even for religious sacrifices.

What is animal sacrifice?
Who were the Zoroastrians?

Some Pythagoreans said it wasn’t right to eat meat. They were vegetarians or vegans. But all Pythagoreans wore their hair long. They wore only simple clothing, and went barefoot. Both men and women were Pythagoreans.

What is the Pythagorean Theorem?
Math in ancient Egypt
Sumerian math and numbers

Architects used it in their measurements. But Pythagoras may be the first mathematician who proved that the Pythagorean Theorem would always be true. We don’t really know whether it was Pythagoras that proved it. There’s no evidence for this proof until the time of Euclid, several hundred years later.

Some people think that the proof must have been written around the time of Euclid, instead. But that’s the tradition.

Bibliography and further reading about Pythagoras:

What’s Your Angle, Pythagoras? A Math Adventure, by Julie Ellis and Phyllis Hornung (2004). For teens.

Pythagoras and the Pythagoreans: A Brief History, by Charles Kahn (2001).