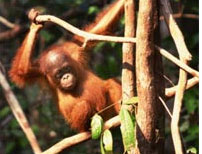 Levers: An orangutan child using a stick as a lever

What is a lever?

A lever is basically just a long stick that you push or pull against a fulcrum – a fixed object – to move something. A lever helps you move something heavy, or make something go fast.

The earliest levers developed naturally inside animals’ bodies. Whenever you pick up anything heavy, your elbow acts as the fulcrum, and your arm bone acts as the lever itself. Natural body levers first developed in fish around 440 million years ago.

Evolution of fish
More about skeletons

A long time after that, maybe around ten million years ago, some kinds of animals figured out how to use an artificial lever to get work done. Sea otters, for example, use rocks to pry open seashells to get sea urchins or abalones to eat. Orangutans use sticks to pry open pieces of spiny fruit to eat the seeds inside.

More about primates
And mammals in general

People have probably used levers as tools for at least two hundred thousand years, as long as there have been people on earth. At first, people used levers the way otters and orangutans do, to break into shells and fruits to eat the food inside. A bow and arrow is also a kind of lever.

By about 17,000 BC, people were also using atlatls, or spear-throwers, to be able to throw spears farther and harder than before.

A new kind of lever: the shaduf

By the time people were living in cities, about 3500 BC, they used levers for many more things. One of the most important uses of levers was for a shaduf to lift water into irrigation channels.

More about a shaduf

People understood that your lever would work better if you got the right length stick, and if you had a fulcrum – a rock to lean it on.

By about 200 BC, scientists like Archimedes were beginning to figure out why levers worked.

Bill Nye about levers and wheels

These scientists saw that a lever lets you do a lot of easy work instead of doing a little bit of hard work. If you’re trying to lift a heavy rock one foot off the ground (against Earth gravity), you might not be able to lift it at all.

But if you have a lever – a long stick – you can get a mechanical advantage. You can push the lever down pretty easily, but you have to move it down four feet in order to lift the rock one foot. You’ve done a lot of easy work (pushing down for four feet) instead of a little hard work (pulling up for one foot). It’s the same amount of work, in the end, but spread out more.

The amount of work you need to lift the rock a foot is always the same, whether you use the machine or not: work is always force times distance. To lift a four pound rock one foot up, you need 4×1 = 4 pound-feet of work.

A hammer used as a lever

Some modern examples of a lever are using a hammer to pull out a nail, using a bottle-opener to open a beer bottle, using a screwdriver to pry the lid off a can of paint, a pair of scissors, using a balance scale to weigh things, using a wheelbarrow, and playing on a see-saw (teeter-totter).

Can you identify the fulcrum in each of these examples? (Hint: it varies, because there are three different kinds of levers).