Swings and seesaws in ancient Greece 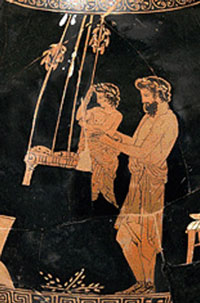 Even though people in ancient Greece loved competitive games, they also played games without competition. In this picture from a Greek vase, a man pushes a little boy in a wooden swing hung from a tree branch. (You can see the leaves hanging down among the ropes of the swing.) The man’s wreath and beard show that he is not a slave, but probably the boy’s father. The swing isn’t quite like our baby swings – it’s more of a wooden platform, where they boy’s legs stick straight out in front of him.

Another popular game was like our see-saws or teeter-totters. Here a long wooden plank is balanced on a center fulcrum, and two girls are jumping on the ends. That’s a much more dangerous version than our see-saws today, where we usually sit down! But it does look like fun. 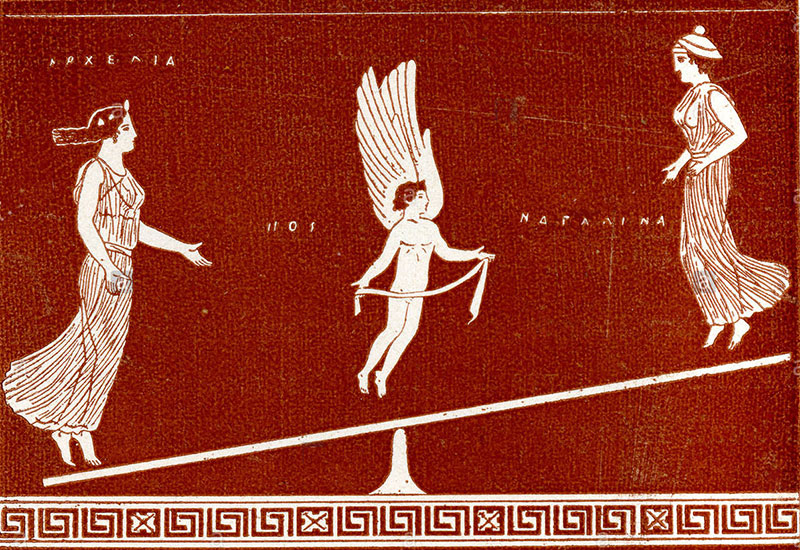 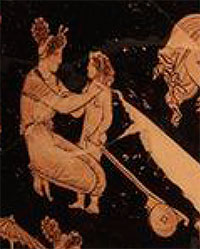 A toddler with a pull-toyA

Clearly there was also a thriving toy-making industry in ancient Greece. That see-saw is balanced on something made for the purpose, and this toddler is dragging a wooden pull toy that was probably bought in a toy-store too. It’s a small wagon on wheels. 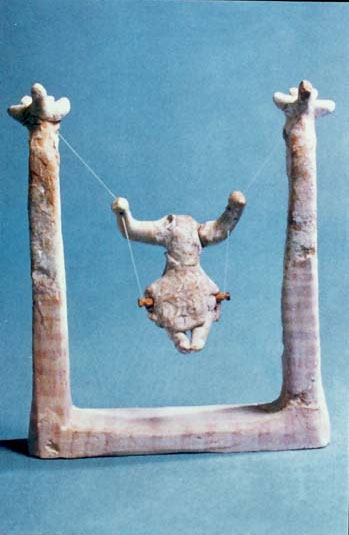 A child on a swingset

Ancient Greek children even had swingsets, as this clay model shows. Probably the swingsets and the swings were made of wood, with hemp ropes for the swings. The little model was also probably a toy swingset, with a little clay doll that swings on it. The clay model swingset, too, was probably made in a small factory and sold in a toystore for parents to give their children.

Other toys from ancient Greece

There are lots of other toys from ancient Greece too – dolls, and tops, and hoops, and other little models.

Sport and Recreation in Ancient Greece: A Sourcebook With Translations, by Waldo E. Sweet (1987) 0195041275. Find out what ancient Greek and Roman writers had to say about sports and games, in their own words.