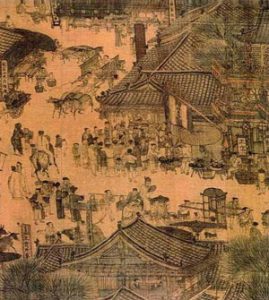 Along the River During Qingming Festival (Song Dynasty, 1100s AD)

What is Qingming Jie?

Like Chinese New Year, Qingming Jie is a Chinese spring festival marking the beginning of spring plowing and planting.

When did Qingming Jie start?

By the end of the Han Dynasty, about 200 AD, people celebrated Qingming as the Cold Food festival.

How did people celebrate?

To start the new spring planting year, they put out all the old winter fires. For three days, they didn’t light fires, and ate only cold food. Many people dyed eggs.

More about Easter eggs
What is Easter?
How about Nowruz?
Babylonian New Year

Then they lit the new fires for spring and summer. Compare this to the three days of mourning around the Christian holiday of Easter, from Good Friday to Easter Sunday, and to Easter eggs or the eggs of the Nowruz holiday in Iran. All of these probably grew out of the much older West Asian New Year festival, which spread along the Silk Road.

Starting around 600 AD, in the Sui or T’ang Dynasties, people in northern China also started to go visit their ancestors’ graves, make sacrifices, and clean the graves during the Qingming festival. That’s probably because there were more and more Buddhist people in China, and a lot of Buddhists prayed to the dead.

As on other holidays – Chinese New Year, Halloween – when we are changing from one time to another, people worried that this was a time when demons or bad spirits might get them, and they tried to push the demons away. By about 1200 AD, people in southern China were visiting their ancestors’ graves for Qingming too. 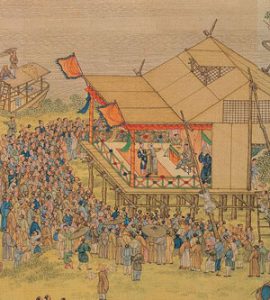 When people visited their ancestors’ graves, of course they met their cousins and second cousins and third cousins there, so Qingming became a time for family reunions, making families stronger.

As the T’ang Dynasty fell apart in the 800s, people needed strong families to protect them from robbers and war.

Women in China
Families in China 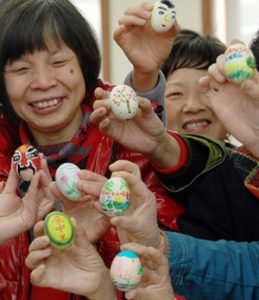 Today, people make offerings to their dead relatives, to keep them happy – people bring their favorite foods and wine, incense, or flowers, and they burn pretend money. Some people carry willow branches to sweep away demons. People also fly kites. Sometimes people fly kites at night with little lanterns attached, and then they cut the string and let the kite fly away, carrying away their bad luck with it.

Bibliography and further reading about Chinese religion and Qingming Festival: