When did Halloween get started?

Halloween is a pretty new holiday – American children didn’t start trick-or-treating on Halloween until about eighty years ago. Halloween is a combination of several different holiday traditions: Native American ones, Irish ones, and old Roman ones. 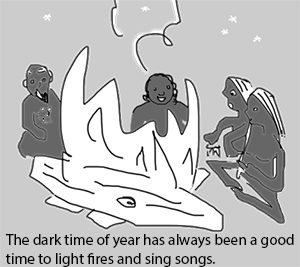 Day of the Dead

By about 500 AD, Mayan and Aztec people in Central America were celebrating the Day of the Dead. In August, people would decorate with skulls as a way of worshipping the goddess of death.

Maya gods and rituals
Who were the Maya?
Where did the Aztec live?

Looking for a cool costume? Check out this Day of the Dead Halloween costume, or click to see many other costumes.

In Northern Europe at the same time, people celebrated the Feast of the Dead at the end of October, with bonfires, sacrifices to the gods, and jack o’lanterns carved from turnips. When people became Christians, about 500 AD, they renamed this holiday All Saints’ Day, and called the night before All Saints’ Day Halloween. That’s because it’s Hallows – a holy day – but it’s the evening before that day – “een” is short for “evening”.

History of animal sacrifice
More about northern Europe
When did people become Christians?

In southern Europe, people dressed up around the darkest time of the year (which is now Christmas for many Americans), and went to rich people’s houses and demanded nice things to eat (and especially wine to drink!). People were already doing this in the Roman Empire, and all through the Middle Ages Christians begged at Christmas all over Europe.

More about the Roman Empire
Christmas in medieval Europe 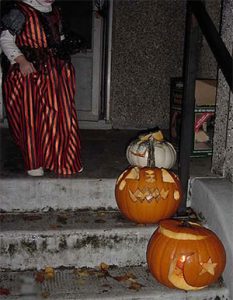 Day of the Dead to Halloween

When Spanish people conquered the Aztecs in the 1500s AD, and Aztec people became Christians, their priests told them to move the Day of the Dead to the end of October, to match up with Halloween. Beginning in the 1800s, a lot of people came to the United States from Ireland. These people brought with them their Halloween bonfires and jack o’lanterns. They found pumpkins in America and started to carve pumpkins instead of turnips.

Colonization of Mexico
The Three Sisters: corn, beans, and squash

Trick or treating at Thanksgiving

But there was still no trick-or-treating. Kids usually begged for treats at Christmas, not Halloween. But about 1900, city mayors tried to stop begging at Christmas, and kids began to go door to door at Thanksgiving instead.

Trick or treating at Halloween

Then about 1930, teachers and mayors encouraged parents to move trick-or-treating even earlier, to Halloween. By the 1940s, most kids went trick-or-treating at Halloween, and also carved pumpkins and decorated with skulls. Gradually, especially on the West Coast, Halloween has gotten more and more mixed with the old Day of the Dead, so the old native traditions are becoming normal again.

Did you find out what you wanted to know about the history of Halloween? Let us know in the comments!

Learn by doing: decorate your house for Halloween
More about skeletons
More about pumpkins

Bibliography and further reading about the history of Halloween: