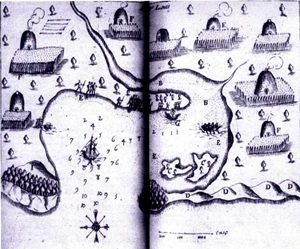 History of Thanksgiving: A map of Wampanoag village at Plymouth Bay in 1613 AD, just *before* the Puritans arrived. See the growing corn around each house?

Beginning about 100 AD, when they started farming their food, all throughout the middle and eastern parts of North America, people celebrated the Green Corn Ceremony every fall when the corn got ripe. This was a harvest festival, like the harvest festivals all farming people have in the fall all over the world. At the Green Corn Ceremony, people thanked the corn gods for a good harvest, and ate lots of food, especially corn.

Corn, beans, and squash growing together

When Christian European settlers first came to North America in the 1500s AD, local people taught the settlers to grow corn and squash and beans too, and the settlers also held harvest feasts in the fall to thank their God and to feast on the good food.

The Iroquois
The Cherokee
History of squash
The Three Sisters

In November 1621, when the settlers at Plymouth had been in America almost a year, they decided to hold a feast with the local Wampanoag people to celebrate their first harvest. They didn’t call this a Thanksgiving, just a feast.

At this feast, the settlers and Wampanoag people ate corn, and squash, and beans, just as people always had at the Green Corn Ceremony. They ate other local foods, like onions, cranberries, ducks, turkey, oysters, clams, and venison (deer meat).

Where did turkey come from?
History of sugar

Like the Green Corn Ceremony, this feast went on for several days. The settlers had run out of sugar, and had no ovens, so there were no pies, but they might have had berries for dessert.

More Thanksgivings in the 1600s

All through the 1600s, people – Iroquois, Cherokee, English, French, or Spanish – kept on holding harvest festivals in the fall all over eastern and southern North America. People also held Thanksgiving holidays now and then.

These Thanksgivings meant thanking the Christian God at church services. They didn’t have a regular schedule, just whenever something good had happened.

Gradually people began to combine these two ideas and to have a Thanksgiving feast every year in the fall. People served mostly American food at their Thanksgiving feast – sweet potatoes, cornbread, pigeon pie, maple syrup, squash and pumpkin, potatoes, greens, and cranberries.

History of sweet potatoes
History of white potatoes
Where do apples come from?

But they also added some European fall harvest foods the settlers had brought to North America, especially apples and apple cider, and they gradually replaced most of the maple syrup with sugar.

Learn by doing: sweet potato pie
More about Thanksgiving (after 1700)
More about Native American food
And more about the Puritans