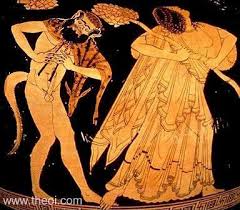 Euripides wrote this play, which is, like many of Euripides’ plays (like Phaedra or Medea), primarily about the balance between self-control (sophrosyne (SOFF-row-sue-nay) in Greek) and emotional freedom. This is another aspect of the conflict between nature and law, chaos and order physis and nomos, which the Greeks saw as central to the world.

Who is Euripides?
Chaos and order
More Greek literature
All our Ancient Greece articles

Pentheus is a control freak

In the play, Pentheus is the king of Thebes, a city in central Greece. Pentheus prides himself on being rational and controlled.

More about Thebes
Who is Dionysos?
Wine in ancient Greece

Along comes this stranger (Dionysos in disguise), dancing and singing and drinking wine. Pentheus thinks it’s disgusting. Dionysos invites Pentheus to join in the partying, but Pentheus doesn’t want to have anything to do with it. 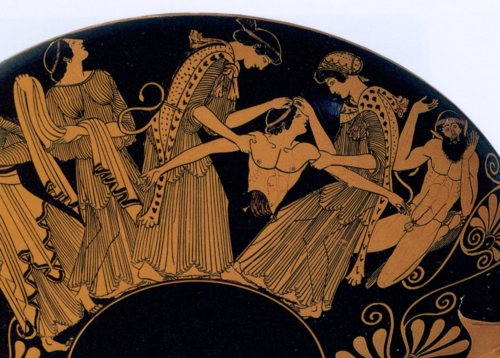 Agave and her followers tear her son Pentheus apart under the influence of Dionysos, in a scene from Euripides’ Bacchae.

Of course Dionysos is angry. It is always dangerous to refuse to do what a god wants you to do!

So this is what Dionysos does: Dionysos gets all of Pentheus’ female relatives involved in the dancing and partying, his mother, his sisters, and so forth. They all dance off into the hills behind Pentheus’ palace. (The Greeks believed that women were generally less rational so it was easier to convince them to follow Dionysos).

Then Dionysos makes his own spirit enter Pentheus’ body and take it over and make it do what he wants. So against his will Pentheus finds himself dancing, singing, even putting on a dress like a woman! and then dancing off into the hills like his mother and sisters.

But by now his mother and sisters are so crazy with Dionysos that they don’t even recognize him when he shows up. Dionysos makes them think Pentheus is a deer, and they tear him to pieces with their bare hands and eat him (compare the story of Actaeon). That’s the kind of thing that happens to people who go against the gods.

Know when to let go

Euripides is warning us: although it is good to have some self-control, you also have to know when to let go, or it will all burst out when you least expect it, and destroy you.

Another way to look at the Bacchae: Ancient Greece was a major exporter of wine. The Greeks sold wine all over the Mediterranean and to the Persian Empire and the Scythians.

Maybe a story about the greatness of wine was pretty well guaranteed to be popular at a Greek theater festival. Maybe it was helpful in selling wine to barbaroi – foreigners – far away from home, too? Like a sort of advertising campaign?

Learn by doing: write about a time when you let go of your self-control
More about Euripides

Bibliography and further reading about the Bacchae: