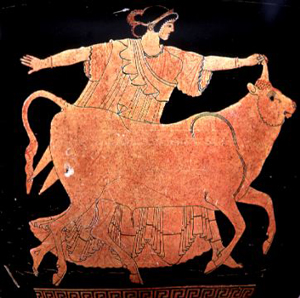 Europa holding the horn of Zeus (disguised as a bull) – Athenian vase found in northern Italy, 480 BC

Europa, according to Greek mythology, was a girl who lived a long time ago, the daughter of the king of the Phoenicians.

Who were the Phoenicians?
More Greek myths
All our ancient Greece articles

What happened to her?

Zeus fell in love with her. In order to get close to her, he disguised himself as a white bull. He carried her away from Phoenicia, to Crete. (Zeus himself stayed in a cave on Crete as a baby, so you might say it was his home.) Anyway, Zeus kept Europa on Crete and raped her there. Soon afterward, she became the mother of King Minos of Crete.

Gaia and baby Zeus
Zeus as a god
Who was King Minos?

Why is her name Europa?

Nobody really knows. From her name, she seems to have something to do with Europe, but nobody knows exactly what.

Europa’s travels from Phoenicia to Crete

Why did Greeks tell this story?

Probably for several reasons. One, to remind people that men could and should treat women however they wanted. And to suggest – falsely – that women didn’t really mind it.

Two, possibly to distract people from the fact that many women were captured not out of love but to enslave them. A lot of those enslaved women worked in factories or workshops, making wool cloth or shell beads for rich families to sell. Other women worked in child care or elder care, or they worked in the fields weeding and harvesting food.

Three, you could also see the story of Europa and the bull as a poetical way of remembering that people originally came to Crete from West Asia, long ago in the Stone Age.

Learn by doing: visit a real bull (at the state fair?)
More about Zeus

Bibliography and further reading about Europa: