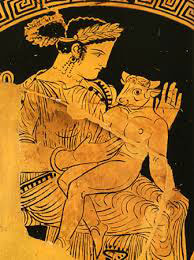 Once upon a time on the island of Crete, maybe about 1325 BC, Europa‘s son Minos became the king of Crete, and his wife was Queen Pasiphae (in the story; this is only a story). The gods were angry at Minos and Pasiphae (PAH-si-fay), and they made them have a monster for a baby. The baby monster was half man and half bull, and so it was called the Minotaur (tauros means bull in Greek).

Who were the real Minoans?
Theseus and the Minotaur
Lots more Greek mythology
All our ancient Greece articles 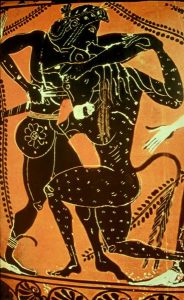 The Minotaur in the Labyrinth

The Minotaur, when it grew up, was wild and dangerous. It ate people, so Minos and Pasiphae kept it in a special part of their palace at Knossos, which was called the Labyrinth. The story says that the Labyrinth was designed by a very clever architect and inventor named Daedalus. (You can read Daedalus’ story here.)

Daedalus and Icarus
The Minoan palace at Knossos

Was the Labyrinth real?

Although Knossos was a real palace, which archaeologists have found and dug up, there wasn’t really a labyrinth in it, and probably the Minotaur was a story more than something that really happened.

Learn by doing: go see a real bull (at the State Fair, maybe?)
Theseus and the Minotaur

Bibliography and further reading about Theseus and the Minotaur:

D’aulaire’s Book of Greek Myths, by Edgar and Ingri D’Aulaire (Look under Theseus).

More about Daedalus and Icarus
The story of Theseus and the Minotaur
Ancient Greece
Quatr.us home