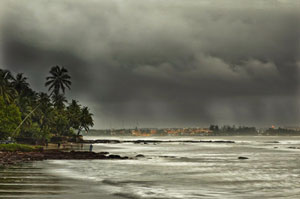 Around 1000 BC, in the Vedic period in India, Varuna was an important Hindu god. Varuna was originally a sky god – his name means “the one who covers everything.” Often people think of Varuna as a rain god. He represented order in the universe (against the forces of chaos). Some parts of Varuna’s identity, at least, seem to come from Yamnaya (Indo-European) roots in Central Asia. So Varuna might be another form of the German god Tyr, the Greek god Zeus, and the Roman god Jupiter. People worshipped Varuna with animal sacrifices. 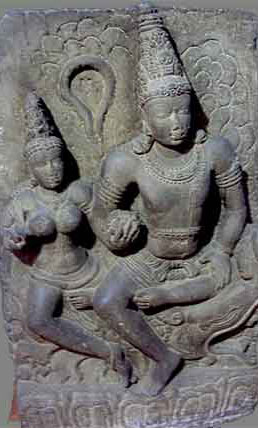 Varuna may also have been the inspiration for the Zoroastrian god Ahura Mazda. Ahura Mazda probably became popular in eastern Iran (not so far from India) about 1000 BC. Like Varuna, Ahura Mazda represents order standing up against chaos (sometimes through his assistant, Mithra).

Over time, Varuna seems to have gotten less powerful as Indra became more powerful. When Indra took over being India’s main sky god, Varuna developed a more specialized role. People started to think of Varuna as a judge who punished people who broke their word (like the Zoroastrian god Mithra). Varuna carried a noose so he could catch and hang bad people. He also developed a role as the sea god (like the Greek Poseidon) and the lord of the underworld (like the Greek Hades).

By about 300 BC, with the formation of the Mauryan Empire, people weren’t as interested in Indra and Varuna anymore. Instead, they paid more attention to new Hindu gods -like Shiva and Vishnu, who didn’t demand animal sacrifices. But Varuna was still a god. Even a thousand years later sculptors still carved his image onto temples all over India.

Bibliography and further reading about Varuna: