Who was the Norse god Loki? 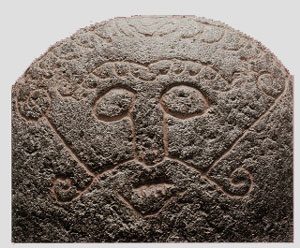 Who was the god Loki?

Loki was the German god of tricks. He was kind of like the Indian god Krishna, the Greek god Hermes, or the African spider Anansi. To help him in his tricks, he could transform himself into lots of different shapes including into girl shapes if he wanted. He was the father of Fenrir the giant wolf, Hel, a goddess who ruled the kingdom of the dead (that’s where we get our word “Hell”), and other creatures.

Krishna in India
Who was Hermes?
More about Anansi
The god Thor
Other Norse gods
All our Northern Europe articles

The giant Thrym stole Thor‘s hammer and wouldn’t give it back. Thrym said, “I’ll give back your hammer when you send me your wife, Freya, to be MY wife.” Well, Thor was okay with that, but Freya wouldn’t go. In fact, her anger “shook the hall”. So instead Thor dressed up as Freya, and Loki dressed up as Freya’s servant, and they traveled together to the land of the giants.

When Thor and Loki got there, Thrym and the other giants believed that they were Freya and her servant, even though Thor did a terrible job of acting like Freya.
For instance, at dinner Thor ate a whole ox and drank three measures of mead (like beer)! The giants were a little suspicious then, but Loki quickly explained, “Oh, Freya’s just so excited about getting married to Thrym that she is eating a lot!”

Then Thrym looked under Freya’s veil (but it was really Thor), wanting to kiss her, and he was frightened by Thor’s red eyes. Again Loki explained, “Oh, Freya’s so excited that she hasn’t slept for eight nights! That’s why her eyes are red.”
But during the wedding ceremony, Thrym brought Thor’s hammer out and let him hold it (thinking he was Freya). Immediately Thor grabbed his hammer and pounded the giants to pieces. Then he and Loki were able to get away with the hammer.

(We don’t really know how old this story is; the oldest written versions of it are from the 1600s. You can find a version of the original poem at this web site) Do you think it’s like the story of Little Red Riding Hood?

Loki also helped men against the gods sometimes, like Prometheus in Greek myth.

Learn by doing: Act out the story of Loki and Thor with some friends
More about Thor