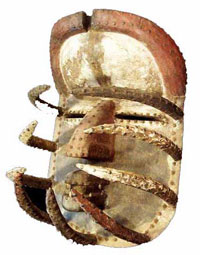 Anansi the Spider: A spider mask from West Africa (but only fifty or a hundred years old)

When were Anansi stories written?

African storytellers tell stories about a clever spider named Anansi. Nobody wrote down these stories about Anansi the spider until about a hundred years ago. Are these the same stories that people told in medieval West Africa? Nobody really knows. But they are traditional stories. Many people think these stories come from stories that were told a very long time ago.

Do they come from Buddhist stories?

Why do we think these stories are so old?  Well, people told very similar stories in Central Africa and South Africa too. So the people in those parts of Africa must have had time to learn the stories. Or maybe the Bantu brought these stories with them when they traveled to Central Africa and South Africa about 400 AD. Possibly the Anansi stories are related to Buddhist Jataka Tales from India, which people first wrote down around 300 BC.

What are the Jataka Tales?
More about Buddhism

Certainly people were telling these Anansi stories in the 1700s AD. We know that because many of the people who were forced to leave Africa and go to North America as slaves brought these stories with them. In America, the African Anansi stories mixed with Cherokee stories and became known as Br’er Rabbit stories. Here are some stories about Anansi the Spider:

You might want to compare these Anansi stories to the Br’er Rabbit stories.