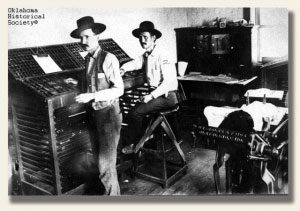 The printing press of the Cherokee Advocate in the 1800s, which first printed a Br’er Rabbit story (the Tar Baby)

Why is he called Br’er Rabbit?

Br’er Rabbit is short for “Brother Rabbit”. He’s a rabbit who tricks people. But sometimes he gets tricked himself! Br’er Rabbit is a lot like the African Anansi the Spider.

Bre’r Rabbit is also like the rabbit in earlier Creek and Cherokee stories. Some of his stories may go back to much earlier Buddhist Jataka Tales from India, or even further.

In West Africa and Central Africa, where many of these African-Americans came from, the same kind of stories are sometimes about rabbits. Probably the Br’er Rabbit stories came from mixing of these two earlier kinds of stories in the 1800s AD. Many African people were working as slaves planting rice and picking cotton in Georgia and Louisiana, and they met Cherokee people there. So the stories mixed together.

African-American slavery
Cotton and slavery
Who were the Cherokee?

By 1845, Cherokee people had printed the Tar Baby story in their newspaper. White children learned these stories too, and liked them, and by the 1880s white people began to write down Br’er Rabbit stories and get them printed in English and French books.

Some Br’er Rabbit stories for you

Some of the best known Br’er Rabbit stories are the stories of the Tar Baby, How Br’er Bear Lost his Tail, and Br’er Rabbit Takes a Ride.