In 1500 AD, people living in North America spoke many different languages. None of them were written down. Many of these languages died out in the 1500s and 1600s AD, because so many people had died of smallpox and measles that hardly anyone was left to speak those languages anymore.

In the course of the 1700s and 1800s, Christian missionaries came to North America from Europe. They tried to get people in North America to become Christians. Some of these missionaries taught people to learn English or French so that they could read the Bible. Other missionaries thought it was better to learn the local language and translate the Bible into that language.

Jesuit missionaries
History of the alphabet
Who are the Cherokee? 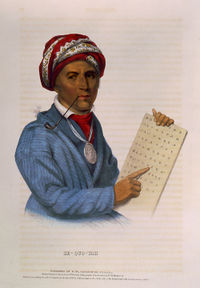 American literature: Sequoyah, who wrote the Cherokee language down

But to translate the Bible, you had to be able to write in that language. So some missionaries designed alphabets for the North American languages. Some of these alphabets became very popular. Now people could write down their own stories and write letters to each other. One example is the Cherokee syllabary. A Cherokee man named Sequoyah probably invented that way of writing (though some people disagree).

A lot of new languages

Also during the 1700s and 1800s, there was a lot of arguing about what languages most people would speak in North America. Most people in America spoke a Native language, but there were a lot of different Native languages. And all these new people were coming from all over the world. Many people in the southern part of North America spoke Spanish, and along the Mississippi valley and in Canada many people spoke French.

Then enslaved African people in the South spoke a variety of African languages. In the center of the continent, many Germans and Scandinavians had settled. So in some towns most people spoke German or Swedish or Norwegian. On the East Coast, most people spoke English, though by the 1750s enough of them spoke German that many English-speakers were worried about it.

The United States has no official language

When men like Thomas Jefferson and Benjamin Franklin were writing the Constitution of the United States in the late 1700s AD, they did not include any rules about an official language. They decided to leave that freedom, like many others, open for people to decide for themselves. 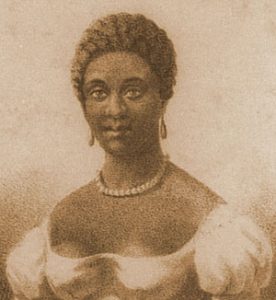 African-American people who had come over from Africa as slaves met local Cherokee people and translated traditional African and Cherokee stories into English as the Br’er Rabbit stories. Both African-Americans like Phillis Wheatley and white people like Anne Bradstreet wrote poetry.

Novels and stories of the 1800s

By the 1800s, people were beginning to write novels, or fictional stories, like those of James Fenimore Cooper (The Last of the Mohicans, 1826). A lot of people thought it was wrong to read novels. They thought novels would rot your brain and teach you bad things. (It was like what people say about television or the Internet today.)

American literature in the 1900s

Then in the 1900s, the use of oil in all aspects of farm work meant that most people didn’t have to work on farms. For the first time in history, most kids had time to go to school. Lots of kids learned to read. To have enough books to sell these new readers, many more people in North America wrote English novels.

A lot of writers lived in the South, like Eudora Welty, Thomas Wolfe, or William Faulkner. The end of slavery after the Civil War and the civil rights movement meant that people who were not white could write more books, like Richard Wright’s Native Son (1940), Toni Morrison’s Beloved (1987), and Amy Tan’s The Joy Luck Club (1989).

By the end of the 1900s, the Internet meant that writing was beginning to take many new forms (blogs, for instance). Many more people were able to participate in writing, as well as reading, literature.

Most of this writing is being done in English, but Spanish is commonly spoken in the United States. A lot of people speak and write in French in Canada and in Louisiana. And people across North America are working to make sure their children speak and write Native languages like Cree and Cherokee.