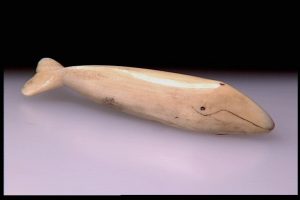 Inuit carving of a fish

The languages Native American people spoke (and still speak) in North America fall into several groups. The Cherokee and the Iroquois, on the East Coast, spoke Iroquoian languages. In the midwest, the Sioux, the Crow, and the Mandan spoke related languages. In the Pacific Northwest, the Chinook and the Nez Perce shared a language group. In the Southwest, the Shoshone, the Paiute, the Ute and Pueblo people spoke languages related to Central American Aztec.

Another large group, who may have arrived in North America later than the Iroquoians, spoke Athabascan languages: the Blackfoot, the Navajo, the Apache, the Cree, the Cheyenne, the Algonquin, the Shawnee. Further north, in Alaska, the Inuit were relatively recent arrivals, who spoke a language unrelated to these others. Californian languages are a whole different story too. A lot of Native people lived in California, and they spoke many different languages. Nobody is sure where Californian languages came from or even how they were related to each other.

It’s not impossible that some people in North America knew how to write before 1500 AD. Some Cherokee people tell stories about an early way of writing, for instance. But there is no evidence from before 1500 of any writing in North America. There’s nothing that looks like paper, and nothing with writing on it. If people were writing at this time, the evidence has all rotted away or people have hidden it. So they can’t have been writing very much. Otherwise there would be stone inscriptions and things that would have lasted, as there are for the Aztec, the Inca, and the Maya in Central and South America.

Most Native kids learned stories by hearing them told out loud. These stories were usually about religion, or about how people should act. Some of these stories were written down, much later, and you can read some of them here: