Inuit creation story: An Inuit carving of a bird

First there were giants. The giants lived on the land and ate plants that they gathered. One day, when it was almost winter, a mother giant and a father giant had a baby girl. Her name was Sedna.

Sedna’s parents decide what to do

Well, that was too much for her parents. They managed to push Sedna into a blanket and between them they carried her to their kayak. It was dark but there was a moon to see by and they paddled the canoe out to sea. When they got way out in the middle of the ocean, where you couldn’t even see the land, they dumped Sedna overboard into the cold water and left her to drown. 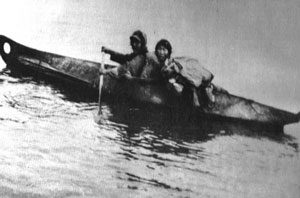 That was that. They started to paddle their canoe home, feeling cold and ashamed of themselves for dumping their own daughter overboard. But they had just started when the canoe stopped – they couldn’t seem to make it go no matter how hard they paddled. Oh no! They saw that Sedna’s huge hands were holding their canoe and rocking it. She was going to toss them into the ocean and they would drown!

Where is Sedna now?

Sedna swam to the bottom of the ocean and stayed there. The fish built her a tent there to live in. She still lives there, and if we are hungry, we can ask Sedna to send us more food, even in the winter.

This is only one version of Sedna’s story, and there are many others.

Learn by doing: go see some sea lions and seals at the coast, or at an aquarium or zoo
More about the Inuit people

Bibliography and further reading about the Inuit creation myth: