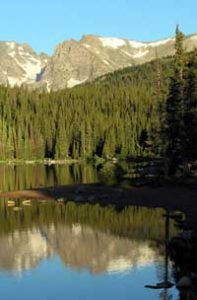 People didn’t always live here, where they live now. First they walked through four different worlds. These other worlds were inside the earth. It was dark there. First people would get along, then they would fight and so the people would leave and go to another world, and then the whole thing would start over. Four times this happened. Then they walked up a reed from the bottom of a lake and that’s how they got into this world. First Man and First Woman led the people to this world, and they brought along their two children, the Changing Twins.

When First Man and First Woman and the twins got to this world, it was all covered with water. But winds came and blew the water off of some of the land, so people could live on it. Then First Man got help from the diyin dine (spirit people) to make all the things on earth. He had a sacred medicine bundle and he took out the things in the bundle one by one and sang to it, and so he turned it into a mountain, or a tree, or an animal, or a time of day, or something else. (Compare this to the Jewish story of Adam), or the Hindu story of Shiva). 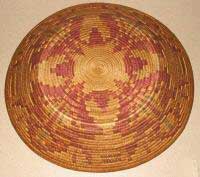 Once the earth was made, the twin brothers made all the things that people need. First one of the twins scooped up some clay from the stream in his hand and shaped it into a food bowl. Then his brother found some reeds growing and wove them into a basket. The twins picked up stones and made them into knives and spear points and hammers, and they made digging sticks out of wood, and hoes from deer shoulder blades. So people got all the tools that they needed. (Compare this to the Greek story of Prometheus).

Bibliography and further reading about the Navajo creation myth: