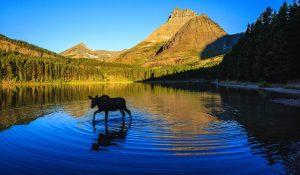 People we call Athabascans or Dene lived in Blackfoot territory (modern Montana and Canada) in the Paleo-Indian period, by around 10,000 BC. They lived by hunting and gathering. They hunted mammoth, and gathered eggs and wild plants. By 6000 BC, in the Archaic period, the climate warmed up, so the big animals like mammoth became extinct. Now Blackfoot people hunted bison, deer, and mountain sheep, using their spears and atlatls.

By the Woodland period, about 1 AD, Blackfoot hunters used bows and arrows instead of spears and atlatls. Their bows let them shoot bison and other animals more accurately and from much further away. That way they could catch more food. Kids lived with their families in wickiups or in tipis, usually in small groups called bands. Sometimes in winter people built pit houses to keep warm. The Blackfoot were nomads who often changed where they were living. They had dogs that pulled their stuff for them. They traveled about five to eight miles a day. 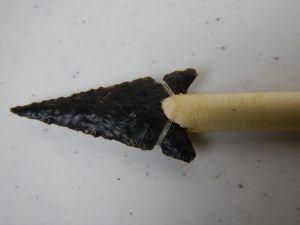 A Blackfoot arrowhead, made of chipped stone

At some point before 200 AD, some of the Athabascan Blackfoot people left and travelled further east across Canada, where they became the Cree and the Algonquin. Some went even further south and became the Shawnee. Blackfoot people therefore spoke a language related to Cree, Algonquin, and Shawnee.

Around 1300 AD, the climate got cooler, and maybe it was harder to find enough food so far north. Some of the Blackfoot or Athabascans left and travelled slowly south to what is now the south-western United States, where they became the Navajo and the Apache. Because of this migration, Navajo and Apache languages are also related to Blackfoot.

Learn by doing: make an atlatl
More about the Blackfoot