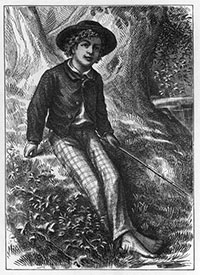 The first time you read Tom Sawyer, you’ll want to just read it fast all the way through, because it’s an exciting story. The second time, slow down and think about just what Mark Twain is telling you about the world.

Try this: make a list of ten times that a grown-up tells Tom what to do. Divide the list into two halves – when the adult is right, and when Tom knows better (you may have some in-between cases). What is Mark Twain trying to tell us?

Or try this: Imagine that Tom was a good boy like his brother Sid, and never sneaked out at night or broke the rules. How would the story end up different? Would that be a better result?

Mark Twain was a white man who grew up in the South with slavery. Take a close look at what he has to say about black people like Jim and Native Americans like Injun Joe. Is Twain being fair to people of color?

Reading The Prince and the Pauper
More about Mark Twain