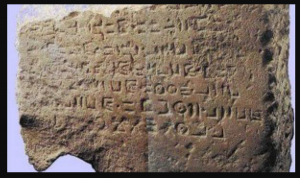 Funeral inscription for King Massinissa, at Dougga , dated 138 BC. (Now in the Bardo Museum in Tunis). The inscription’s in two African languages: Punic (Phoenician) and Berber.

Because Africa is such a big place, people who lived in different parts of Africa spoke different languages. There are hundreds of different African languages. In North Africa and Egypt, people spoke languages related to Arabic and Hebrew, called Egyptian and Berber. Under Roman rule, some people also spoke Latin or Greek. Then when North Africa was conquered by the Arabs, many people there began to speak Arabic (although others continued to speak Berber).

In West Africa, people spoke languages related to Bantu (BAN-too), like Yoruba. This language gradually spread across Africa, east and south, so that now people in many parts of Africa speak languages related to Bantu. Probably before this, most people in the southern half of Africa spoke languages like the !Kung language. Nobody knows whether Bantu-speaking people moved all over the place, or just new people began to speak the Bantu language.

In East Africa, people spoke a Bantu language called Swahili (swah-HEE-lee), which had so many Arabic words in it that it was almost a mixed language, a creole.

And in South Africa, people spoke languages which used a lot of clicking sounds and are often called click languages, which sound different and are not closely related to any other known languages. One of these languages is !Kung. These may be like the earliest human languages. They are different because the people who lived in South Africa were isolated, and didn’t speak to outsiders very often.

Around 500 AD, when Bantu-speaking people moved into South Africa, they began to mix a lot of local !Kung words into their own language, and that created new languages called Xhosa and Zulu. 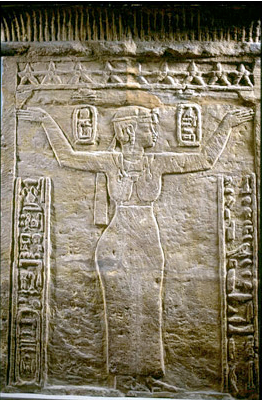 Queen Amanitore of Sudan (1-25 AD) with both Egyptian and Meroitic hieroglyphs.

The people who spoke these languages all made up stories and told them to their children, like the Anansi stories that some Bantu speakers told.

In the rest of North Africa, people began to write about 800 BC, when Phoenician invaders brought the alphabet with them. We don’t have any long stories from ancient Carthage, but we do have inscriptions and tombstones. In Meroe and Aksum, as well, people began using a variation of the West Asian alphabet known as the Ge’ez script around the 400s BC.

When the Romans conquered North Africa in the 100s BC, people there slowly began to write in Greek and Latin instead of in Phoenician. Some famous African writers from this time are Tertullian, Perpetua, Cyprian, and Augustine (who were all Christians).

After 700 AD, when the Arabs conquered North Africa, people continued to write, but now in the Arabic alphabet. Arabic writing slowly spread south, so that soon many people south of the Sahara Desert were also writing books using Arabic writing – in Timbuktu and in Djenne in West Africa, and all along the coast of East Africa as well. This is the time when the first singers might have begun to sing the Epic of Sundiata. The most famous writer of this period is Ibn Battuta, who came from Morocco and wrote a history of his travels in Africa and all over the world in the 1300s AD. In the 1400s, Ibn Khaldun, from Tunis, also wrote an important history of North Africa. In Ethiopia, however, people continued to practice Christianity and to use their own Ge’ez script.

Bibliography and further reading about African languages and literature:

Or check out this African languages article from the Encyclopedia Britannica.