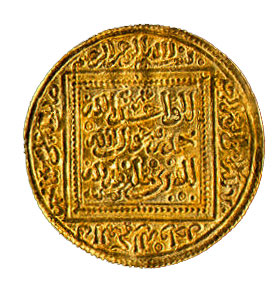 The Hafsid Dynasty minted gold coins like this one

The Hafsids replace the Almohads

In the early 1200s AD, the Almohad empire fell apart into Marinid, Christian, and Hafsid kingdoms. The middle of North Africa broke away from the Almohad dynasty in 1229 AD. Modern Tunisia, western Libya, and eastern Algeria came under the leadership of Abu Zakariya. People called his descendants the Hafsids, because they belonged to the powerful Banu Hafs family.

Who were the Almohads?
More about the Marinids
Late Medieval Islamic history
All our Islamic Empire articles 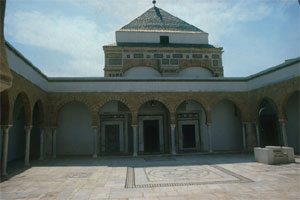 The mausoleum (tomb) of Sidi Qasim, in Tunis

A wealthy and diverse kingdom

Who was Ibn Khaldun?
The Reconquest in Spain

These refugees brought with them money and education and a lot of energy. They built new houses and new mosques all over the Hafsid kingdom, especially in Tunis. Many new buildings in Tunis had the horseshoe arches and tiles of medieval Spanish architecture. They helped to remind the refugees of the home they had lost.

Trade and tribute to Sicily

The Hafsids were rich enough to pay the Holy Roman Emperor Friedrich II a lot of money every year (well, most years) to keep him from attacking them. The Hafsids also bought a lot of Sicilian wheat and barley. After Friedrich died in 1250 the Hafsid sultan Mustansir tried to stop the payments. But Louis IX and his youngest brother Charles attacked Tunis as the Eighth Crusade. That encouraged Mustansir to start paying protection money again.

Who was Friedrich II?
The Eighth Crusade

The Black Death in North Africa

The Hafsids become pirates and slavers

The Hafsids bought more and more manufactured goods like paper from Italy. To resist European power and make money, the Hafsids started to attack European ships in the Mediterranean Sea. That is, they became pirates.  During the 1400s, the Hafsids also tried to diversify; they traded south across the Sahara with the people of West Africa, and east across the Sahara with the Mamluks in Egypt.

Paper manufacturing in Italy
History of slavery
Who were the Mamluks?
Egypt under Islamic rule

Conquered by the Ottoman Empire

But by the 1500s the Hafsids were not really independent anymore. The Berber people, who were nomads, were independent. The Hafsids just bounced back and forth between being conquered by the Ottomans and being vassals of the Holy Roman Empire. In 1574, Nurbanu Sultan of the Ottoman Empire finally sent troops to conquer Tunis, killed the last Hafsid caliph, and ended the Hafsid kingdom.

Learn by doing: play pirates for a day
More about the Ottoman Turks

Bibliography and further reading about the Hafsids:

To the north: Spain
or to the south:West Africa
and to the east: Mamluks
To the west: Marinids
More Islamic Empire
Quatr.us home