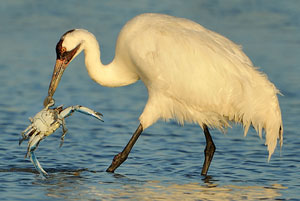 Jataka tales: the Crab and the Crane (Thanks to Alan Murphy)

What are Jataka tales?

During the 300s BC, when the Mauryan Empire was first uniting northern India, Buddhist monks and nuns in India began to tell stories about the earlier lives of the Buddha before he was reborn as the Buddha. Alphabetic writing was still pretty new and exciting in India at this time, and the Buddhists used the new alphabet to write down their stories as poems.

What are Jataka tales about?

Many of these stories were not actually about the Buddha as a person. Many were short lessons in how to get along in the world. The story of The Monkey and the Crocodile, for instance, is a warning not to trust outsiders. The story of The Crab and the Crane shows that if you trick other people, they will stop trusting you. We call all of these stories the Jataka Tales.

The Crab and the Crane
The Monkey and the Crocodile 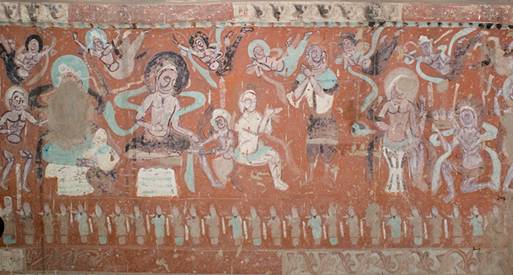 An example of karma:
King Siva offers his body to save a dove from a hawk, and King Candraprabha is so generous that he gives away his own head (Mogao Caves, China, about 500 AD)

The spread of Jataka tales

As Buddhists traveled around Asia and Africa, these stories went with them. Jataka tales may have influenced story-tellers in many other places. Aesop’s fables in ancient Greece, first written down around the same time, may have taken elements from these Indian stories, or the other way around. Islamic stories about Nasruddin might also.

The Anansi stories in Africa  may be related to these Indian Buddhist stories too. Finally, when the African Anansi stories reached America, they mixed with Native American stories to produce the Br’er Rabbit stories there.

Learn by doing: Learn one of these stories and tell it to a group of people
More Indian Literature

The Rig Veda
The Ramayana
The Mahabharata
The Bhagavad Gita
More about India
Quatr.us home