The Monkey and the Crocodile – Jataka Tales 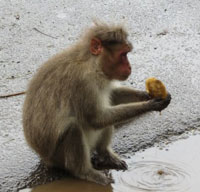 A monkey eating a mango

Crocodile‘s mother asked him to bring her Monkey’s heart to eat, so Crocodile tried to trick Monkey and get his heart. “Hey Monkey!” he said, “Let me swim you over to that island, to get some yummy mangoes!” “Sure thing!” said Monkey, and he hopped on Crocodile’s back for a ride. But when they were in the deep water, Crocodile said, “Ha, Monkey! Now I’m going to drown you and take your heart to my mother to eat.”

Thinking fast, the frightened monkey said, “My heart? But I don’t take my heart everywhere with me! I left it home in my tree.” “Really?” said the stupid crocodile, “Then I’ll take you back to your tree to get it.” And he did. But when Monkey got back to his tree, he climbed up it and got away. (Compare this to the later Iranian story of Rustem and the Devil, or the story of Br’er Rabbit and the Briar Patch.) 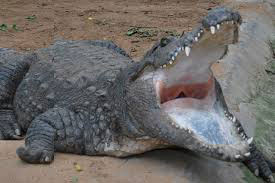 But Crocodile’s mother still wanted that heart, so Crocodile had to try again. He saw that Monkey was already on an island eating mangoes, and he waited around all day until when it got dark Monkey came down to the water to go home. Then Crocodile pretended to be a rock.

But Monkey saw him there. He said, “Oh, Crocodile, I see you there! You’ve caught me this time.” “Yup!” said Crocodile. “I waited all day for this.” “Oh,” said Monkey, “in that case I won’t keep you waiting any longer. Open your mouth wide, and I’ll jump right in.” “Sounds good,” thought Crocodile, and he opened up his enormous toothy jaws. But Monkey knew that crocodiles close their eyes when they open their mouths, and he leaped around Crocodile, over the rocks back to his tree, and was safe at home. Then Crocodile gave up.

Learn by doing: Draw pictures to illustrate this story
More about the Jataka Tales