Rustem swims away – a story in the Shahnameh 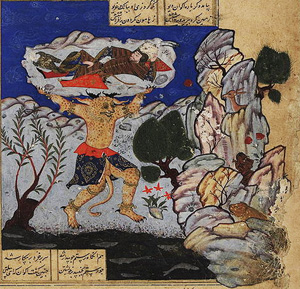 Like Odysseus or Anansi, Monkey or Br’er Rabbit, the Iranian hero Rustem was a trickster. He uses quick thinking to get out of this fix:

Once when he was sleeping alone outside on the ground next to his horse Rukush, Rustem was trapped by the Devil, and the Devil started to carry him away. Rustem woke up and was terrified that he was going to die. The Devil saw that Rustem had woken up and he asked Rustem, “Well, hero, how do you want to die? Want me to throw you off a mountain cliff? Or toss you into the sea?”

Rustem thought that the Devil would probably do whatever he thought would make Rustem suffer the most, so Rustem quickly said, “Oh, Devil, it’s up to you, but I sure hope you don’t throw me into the sea! I hear that drowning keeps you from going to Heaven or finding any rest after you die.”

Naturally the Devil said, “I don’t want you to ever have any rest,” and threw Rustem into the sea, in a place where hungry crocodiles would eat him. But the hero Rustem was a good swimmer. He drew his sword and fought off the hungry crocodiles with his right hand, and he swam with his left hand, and by the time it got dark that night he was standing on dry land, and he gave thanks to God.

This story is may have been influenced by the earlier Buddhist Jataka tale of Monkey and the Crocodile. It’s probably an early inspiration for later Tar Baby stories around the world, moving east to Indonesia and Japan and from there to North America, and west to Africa and from there to North America with enslaved Africans, where it met up with the east-bound version.