Rudaba and Zal in the Shahnameh 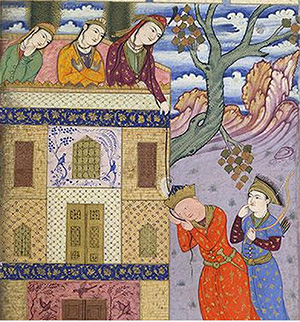 Rudaba lets down her hair

A story from the Shahnameh

Rudaba’s name means “The River Water Girl”. She was a character in the Persian epic Shahnameh, written by the poet Ferdowsi about 1000 AD, at the height of Central Asian power (But the story must be much older than that). In the story, Rudaba’s the daughter of the governor of Kabul, a Babylonian. Her family is fighting with the family of the Mubeds, led by another powerful ruler, Sam. Sam’s son Zal hears a description of the lovely Rudaba and falls in love with her. But, what? Their families are fighting. So his father is against the marriage. And her father locks her up in a tower.

Rudaba lets down her hair

One night, Zal came right up to the tower where Rudaba was. She let down her long hair for Zal to climb like a rope. Zal came up to her, and they talked all night and were more in love than ever. 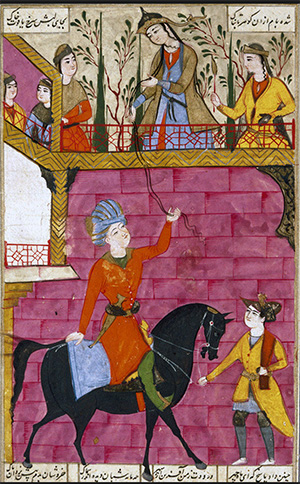 Zal wrote to his father and reminded Sam that he had promised to give him whatever he wanted. Sam consulted astrologers, and the astrologers said that if Zal and Rudaba married, their son would be the conqueror of the world. Encouraged by this news, Sam said they could get married after all. And sure enough, their son was the hero Rustem – but that’s another story.

Medieval Islamic astrology
The story of Sohrab and Rustem

What about Hero and Leander?
History of swimming 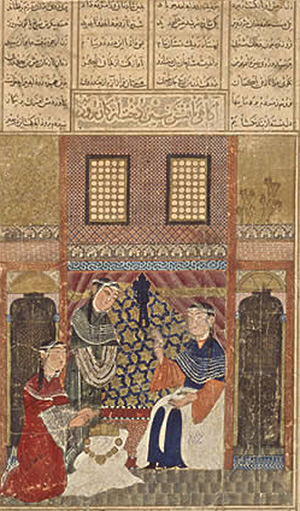 Other versions of this swimming story from Southeast Asia also have a happy ending, like Rudaba’s version. So this may be based on the Southeast Asian version rather than on the Greek version. But Hero, like Rudaba, was trapped in a tower, so it’s clearly related to the Greek story. If Rudaba’s story was originally a swimming story, that would explain why her name means “River Water Girl”. Anyway, Rudaba’s the origin of our story about Rapunzel, which also has a happy ending.