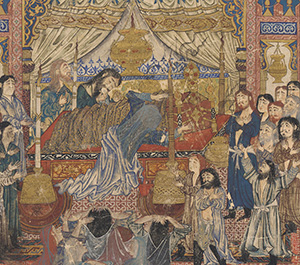 In the 900s AD, Central Asia was the most civilized part of the world. The universities and libraries of Iran and Afghanistan were famous for a thousand miles in every direction. The Iranian Al-Tabari had recently finished writing his huge Islamic History. Here, in 977 AD, the Persian poet Hakim Abu ʾl-Qasim Ferdowsi wrote his long epic poem, the Shahnameh – the Book of Kings. The Shahnameh became to Iran a combination of what the Bible and the Iliad became to Europeans. Like those books, the Shahnameh is partly history, partly poetry. And like the Bible and the Iliad, the Shahnameh strings together a lot of older stories into one long, loosely connected story.

Like the Bible, the Shahnameh begins with the creation of the world. It discusses the invention of cooking fires, metal-working, and law. After this first section, the Shahnameh tells stories about fictional Persian heroes like Rudaba and Zal, and their son, the hero Rustem. Ferdowsi didn’t know much about the Persian Empire before Alexander. The only Persian king he knows is Darius, whom he calls Dara son of Darab. Then Ferdowsi says that Alexander (whom he calls Iskandar) is Dara’s son, and that’s how he became the shah (king) of the Persian Empire.

From Alexander on, Ferdowsi was better informed. He wrote about the Parthians, and then about the Sassanids. (And he wrote a little about the Romans and the Chinese and Indians.) The Sassanian shahs, according to Ferdowsi, were supported by their Zoroastrian “farr”, or spirit. But the later Sassanian kings were corrupt and unjust, living the Lie, and their farr deserted them. In this way, Ferdowsi’s moral echoes Augustine’s City of God. Ferdowsi himself was a Shiite Muslim. The Shahnameh ends almost in the poet’s own time, with the Islamic conquest of Iran from the Sassanids in the 600s AD. Ferdowsi knew a fair amount about the history of Asia. Certainly he knew a lot more than Gregory of Tours, writing a little earlier, knew about European history. 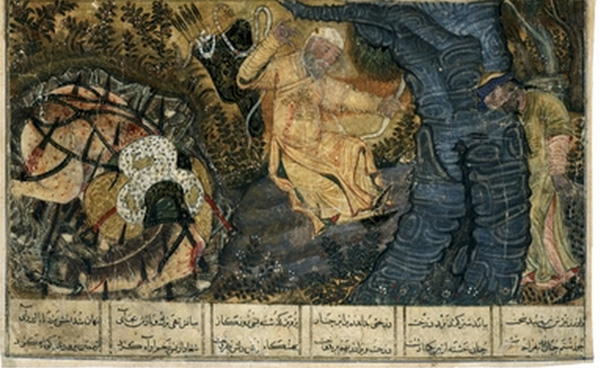 The death of Rustem. His tiger skin is on his dying horse

A bunch of European, Indian, Scythian, and Chinese stories also made it into Ferdowsi’s Shahnameh. Ferdowsi used some scenes from the Iliad. The hero Rustem wears a tiger skin. His story draws from the life of the Hindu god Krishna.

It took Ferdowsi most of his life to write the Shahnameh. For a while the Samanid ruler Mansur supported him and his wife and son. But after the Ghaznavids defeated the Samanids in the 990s, Ferdowsi seems have had a harder time getting support from Sultan Mahmud. As a Turk, Mahmud may have been less interested in Iranian history.