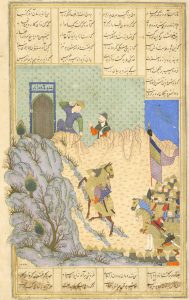 A page from Ferdowsi’s Shahnameh, from Herat, Afghanistan, about 1444 AD. Now in the Fitzwilliam Museum, Cambridge

Islamic historians began by translating Greek historians like Herodotus and Thucydides into Arabic. But soon historians wrote in Arabic about the history of the Islamic Empire.  One example is the huge history written by al-Tabari about 900 AD. Al-Tabari had done a lot of research. His accounts of Islamic history are generally accurate and useful. Like Herodotus before him, if al-Tabari heard different accounts of a story, he wrote down both of them. He left the reader to decide which story was right.

Other historians wrote in Persian, using the Arabic alphabet. One of these was Ferdowsi, who wrote the Shahnameh. The Shahnameh was a history of the Persian kingdom, from the beginning of civilization down to his own time (about 1000 AD). Ferdowsi didn’t know anything much about Cyrus the Great or Darius or Xerxes, but he did know about Alexander the Great, and about the later Sassanian kings, and the coming of Islam. Ferdowsi told many folk stories, too, like the story of Rustem and Sohrab and the story of Rudaba. (We call her Rapunzel.)

By the 1300s AD, the Islamic historian Ibn Khaldun changed the way we think about history. He was writing in Arabic in his home town of Tunis. But Ibn Khaldun didn’t just want to write a history of North Africa and the Berber people. He also tried to develop a scientific method for studying history. He built

on Aristotle and Plato to consider why empires rise and fall, rather than just reporting that they do.

Learn by doing: what do you think historians should write about? Write an essay explaining.
More about the Shahnameh