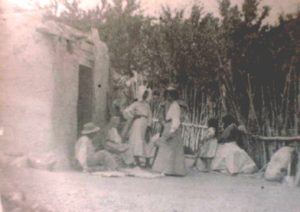 In the late 1600s AD, Cherokee people were still building their towns about the way they had built them before the Europeans arrived. We have a good description from an English trader called James Needham. He visited the Cherokee town of Chota in 1673. (I have modernized the language)

“The town of Chota is on the banks of the river, with very high cliffs all along one side of the river which help to defend the town. On the other three sides the town has a wooden fence built of logs at least two feet thick, standing upright twelve feet high. On top there is a walkway so they can stand on it to defend the walls and shoot out at their enemies.

Many nations of Indians live along this river… which the Cherokees are at war with, and so the Cherokees keep a hundred and fifty canoes ready under the command of their forts. The smallest of these canoes will carry twenty men, and the canoes go very fast because they are pointed at both ends. … Inside the fort, the houses sit along streets.” 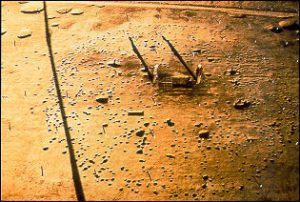 Archaeologists have excavated the main meeting house of Chota. Sure enough, it shows postholes where big posts were set in the ground. They held up the walls and roof. In the center is a big hearth for a fire. Can you see the two darker spots where the posts were? There is one on each side of the hearth.

In 1725, George Chicken, an English army colonel, spent some time in Cherokee towns. He also reported that Cherokee towns had strong walls. They were always ready for war. Some of these wars were with Spanish and English people who were invading. But most of the wars were with other Native American groups, especially Shawnee people. 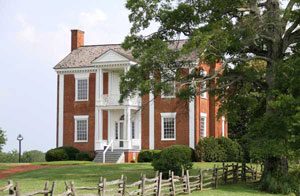 Then during the 1700s, many Cherokee people died of smallpox that they caught from sick Europeans. Their armies were not so strong anymore. Some Cherokee people began to build houses more like European houses. They thought that might help them to get along better with the Europeans. Joseph Vann was a rich Cherokee plantation owner. He built this fancy brick house for his family in 1804. But he also built plank cabins for the African-American people he kept as slaves to live in.

Learn by doing: touring historic houses near you
More about colonial American architecture