The view from Trajan’s Markets

Why did Trajan build a new forum?

After the Forum of Julius Caesar and the Forum of Augustus, later emperors also built more extensions on to the Roman Forum, to make more room for businesses. The emperor Trajan built a new forum about 100 AD.

What is a forum?
Who was Trajan?
More Roman architecture
All our ancient Rome articles 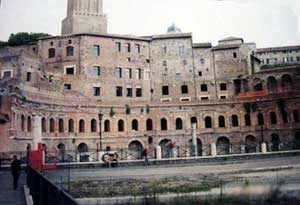 The front of Trajan’s Markets, facing his forum and Trajan’s Column

In the forum there were two big libraries. One was for Latin books and the other one was for Greek books. Between the two libraries stood Trajan’s column. From the upper floors of the libraries, you could easily see the stories wrapped around Trajan’s column like a graphic novel about Trajan’s wars. But the libraries are gone now, and only the column is left. It’s hard to see the scenes at the top now!

In back of his forum, built up against the side of a hill, Trajan also built a lot of shops. This was not a new idea – Julius Caesar had shops in his forum too, a hundred and fifty years earlier. But Trajan’s architect, Apollodorus, built a spectacular shopping mall, instead of just a row of shops. 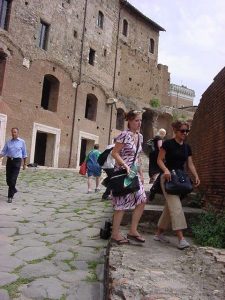 A street paved with basalt inside Trajan’s Markets

Apollodorus built Trajan’s shopping mall out of brick and concrete, like Domitian’s palace that had just been built a few years earlier.

Domitian’s palace
More about concrete
What is marble?

But it wouldn’t have looked like this when it was new, made of brick. All the brick would have been covered with marble facing and stucco. You can still see the holes where people took off the marble facing later to reuse on newer buildings. 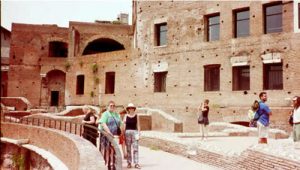 Trajan’s Markets: You can see the holes here where people have removed the marble facing.

Some of the stores were outside, facing onto streets paved with big basalt paving stones. These stores had big doorways, like stores today. You can see the doorways outlined in white travertine. Most of the stores had one big room, and then a loft with a lower ceiling over the top of the store.

What is travertine?
Slavery in ancient Rome

Probably the store-keepers kept extra stuff – overstock – up in the loft. Maybe the enslaved people who worked in the store also slept in the loft. The big windows over the white doorways let light into the lofts.

But there were also stores that were inside, in a big wide hall with two stories like many modern shopping malls. Like the outside stores, the inside ones also had a big doorway and one room for the shop, and then a loft over the top. These stores must have been darker than the ones outside. But on the other hand, they’re really not that dark on a sunny day. And when it was raining, you could do your shopping without getting wet, just like in a modern shopping mall.

The second floor of Trajan’s Markets

The second floor of the Markets

There was a second floor, just like in modern shopping malls, with a floor that was open in the middle. And there were more shops up here on the second floor. These shops were smaller. And they didn’t have lofts over them. Maybe they were cheaper to rent, or held offices rather than really being for shopping?

What did the stores sell?

The stores in Trajan’s Markets probably sold the same sorts of things as in modern malls: clothing, food, shoes, toys and games, jewelry, medicines and perfumes.

Roman games and toys
What did Romans wear?
Medicines in the Roman world

Maybe they also had hair stylists, doctors’ offices, dentists, or art galleries. We really don’t know what was in the stores, because they are completely empty now.

Why were the Markets abandoned?

After a big earthquake hit this area in 849 AD, a lot of people moved across the river, and Trajan’s Markets were probably abandoned for a while.

Later on, in the Middle Ages, people built new tall medieval houses on top of some of the shops. You can see the Gothic style windows on the upper floors, and that the upper floors are built of stone, not brick.

Learn by doing: go to your public library and to a shopping mall
More about Trajan’s Column