Roman men and women, like other Indo-Europeans, originally seem to have worn a large piece of wool, wrapped around themselves. After they met people from Greece and Egypt, around 200 BC, they began to wear linen tunics (like T-shirts) under their wool robes, which was more comfortable. 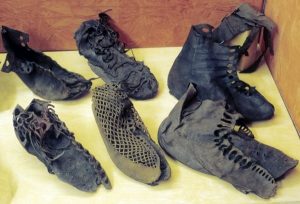 Roman leather shoes, found at the military fort of Vindolanda, in northern England

On their feet, both men and women wore leather sandals, or leather boots in cold weather.

In their hair, women wore wooden hairsticks or wooden combs, which they could also use to comb their hair.

Roman hair sticks for putting up your hair in a bun

For fancy occasions Roman men always continued to wear their wool robes over their tunics. They called these wool robes togas, and there were a lot of rules about how exactly a man should wear his toga, and who could have a stripe on his toga, and so forth, which helped to show who was rich and powerful and who was poor. 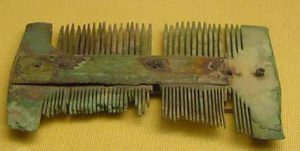 Women often wore more than one linen tunic, and a wool scarf or veil over their tunics, which they could pull over their heads if it was raining or cold. 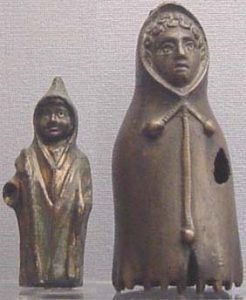 When the Roman Empire controlled provinces all over Europe and the Mediterranean, the people in these different places continued to dress in their local ways, just putting on tunics and togas for special occasions. In Europe, in France and England and Germany, many people wore warm hooded cloaks, like the ones shown here.

Roman costumes, Roman food, and activities
More about Roman use of makeup

Bibliography and further reading about Etruscan and Roman clothing:

Costumes of the Greeks and Romans, by Thomas Hope (19th century, reprinted 1986). More advanced illustrations, for teachers and professional costumers.

The World of Roman Costume, edited by J.L. Sebesta and L. Bonfante (1994). A more culturally oriented study of not only what the Romans wore, but why they wore it. By specialists, but accessible to adults.