Who is Hermes? Ancient Greek god

What is Hermes the god of?

Hermes is a god of boundaries, borders and edges. Because of this, he’s also in charge of things that cross borders, like messages or travelers.

He is the messenger of the Greek gods. So his father, Zeus, often sends Hermes to earth when he has something to say to a person. For instance, Hermes carries messages to Odysseus in Homer‘s Odyssey, and to Alcmena in Plautus‘ Amphitryo.

Who is Zeus?
Homer’s Odyssey 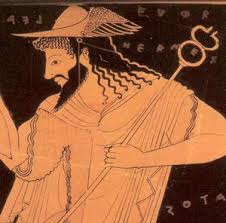 Hermes often wears a traveller’s hat and carries a caduceus, his twisted stick.

Hermes had to travel a lot to be a messenger. So he was also the god who took care of you when you went on a trip. Many Greek people always sacrificed to Hermes before they traveled. Travelers often left a rock for Hermes when they reached a crossroads, so there were often little piles of rocks at crossroads. Hermes also guided dead souls to the afterlife.

The Greek afterlife
What is animal sacrifice?

People thought of Hermes as being younger than the other gods, clever, quick and tricky. He likes to play tricks on the other gods: crossing boundaries in another way. You could compare him to other trickster figures in other cultures, like Anansi in Africa or Br’er Rabbit in North America. He’s also like the Egyptian god Thoth.

A story about Hermes being tricky:

Hermes invented the lyre on the first day after he was born. Later that day, he also stole Apollo’s sacred cattle (cows) and cleverly made the cattle walk backward so their tracks wouldn’t point to his house.

Where do cattle come from?
What is a lyre?
The Greek god Apollo

When Apollo accused Hermes of stealing the cattle, Hermes’ mother Maia insisted that Hermes couldn’t have because he was with her the whole time. But Hermes’ father Zeus, who knew all about it, said Hermes had stolen them really and he should give them back.

At this point Hermes began to play his lyre, and Apollo loved the music so much that he agreed to let Hermes keep the cattle in exchange for the lyre. (For another reference to Apollo’s sacred cattle, check out the Odyssey).

Make your own lyre for a project
More about Apollo

Bibliography and further reading about Hermes: