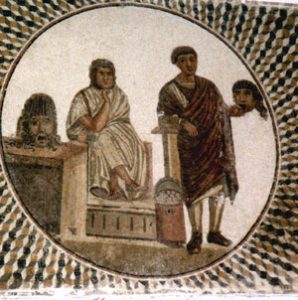 During the Roman Republic, when the Romans first began to go to plays, there weren’t any plays written in Latin, only plays in Greek. Plautus (PLAW-tuss or PLOW-tuss) was one of the first people who wrote plays in Latin for these Roman audiences, in the late 200s BC (about the time of the Second Punic War). All of the plays he wrote were comedies (funny plays). He lived in Rome.

Mostly, Plautus took Greek plays by men like Menander and translated them into Latin. He didn’t translate them exactly, word for word, but he took the stories of these Greek plays and wrote them so that they would be funny to Romans.

Although Plautus wrote many plays, we don’t have all of them written down. Many of them were lost and we don’t have copies of them anymore. The twenty-one plays he wrote that have lasted are those that were chosen for kids to study in school (so the kids needed many copies of them).

The most famous play Plautus wrote is Amphitryo, about the birth of Hercules. But all of Plautus’ plays help us to see what life was like in the Roman Republic for ordinary people – enslaved servants, women, young men, and older men.

Learn by doing: read or perform part of one of Plautus’ plays
Another Roman playwright –Terence

Bibliography and further reading about Plautus: