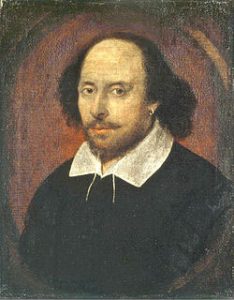 Who was William Shakespeare?

Little Shakespeare was born in England, in the town of Stratford-upon-Avon, in 1564 AD. His family was pretty well off, and he probably went to good schools. Nobody knows if he went to college.

Shakespeare got married when he was just 18 years old! England was getting much richer at this time from world trade, slavery, and colonialism, so it was pretty easy to make money. Soon Shakespeare had enough money from investments to live on. So he never had to work for a living. His wife, Anne Hathaway, and their servants took care of their three kids.

Shakespeare spent most of his time writing plays and acting in them, and became very successful. He probably didn’t see his family much. William Shakespeare died in 1616, when he was only 52 years old. He may have died of typhus, but nobody knows for sure. Typhus was still a pretty new disease then.

What was new about Shakespeare?

In 1600 AD, in the time of Queen Elizabeth, it was still a pretty new thing to write anything in English rather than Latin. Most writers still wrote in Latin. (Though Chaucer had written in English in the 1300s.)

William Shakespeare took advantage of the Renaissance. Scholars had translated Greek and Latin plays into Italian and English. More and more people were reading them.

Even for people who couldn’t read

Everyone was excited about these new stories, and Shakespeare brought the new stories to ordinary English people – even people who couldn’t read. In England in the 1600s, probably only about one out of four men and one out of ten women knew how to read. So plays were a great way for ordinary people to hear these old stories. And because England was getting richer, more and more people could afford to go to plays.

What stories did Shakespeare rewrite?

What was new(ish) about Shakespeare’s plays?

In 1592, there was an outbreak of the Black Death – the bubonic plague – in London. To keep people from catching the plague, Queen Elizabeth closed all the theaters of London. Shakespeare seems to have spent this time writing poetry instead.

Most of Shakespeare’s poetry is in the form of sonnets. A sonnet has fourteen lines. They rhyme in a complicated pattern: the first and third lines rhyme, and then the second and fourth lines rhyme, and so on in this pattern: ABAB CDCD EFEF GG. Usually the first twelve lines present a problem and the last two lines are like the punch-line of the poem.

Most of Shakespeare’s sonnets are about romantic love, which was just the main thing people wrote sonnets about at this time.

Looking for a second source to cite? Check out this short biography.

Want a fun read? Check out this funny article about Shakespeare’s beard!

Bibliography and further reading about Shakespeare: