Who was Menander? An ancient Greek playwright from Athens 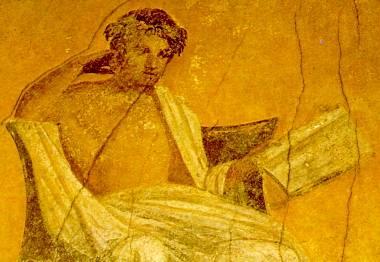 Who was Menander? Here he is on a fresco painting from Pompeii, in Italy, painted after he died.

Menander is the only playwright – a person who wrote plays – from the Hellenistic period whose plays survive. Actually only one play, the Dyskolos, survives, and a lot of fragments. Even the Dyskolos was unknown until 1958. That’s when archaeologists found a copy of it on some old papyri in Egypt.

What is papyrus?
The Hellenistic Period
Greek literature
All our ancient Greece articles

A little bit of Menander, written on papyrus from Egypt

Like Aristophanes, Menander wrote comedies (funny plays). Most of Menander’s plays were like sit-coms or chick flicks today: boy meets girl, then there’s some kind of problem (usually their parents don’t want them to marry), and then in the end something happens so that they do get married. Menander is the first person we know of who wrote this kind of story.

Who was Aristophanes?
More about Plautus
And about Terence
And Shakespeare

The plot of the Dyskolos

For example, in Menander’s play Dyskolos – it means “The Grouch” – an old grouchy man, Knemon. A nice young man, Sostratos, falls in love with Knemon’s daughter, and most of the play is about how Sostratos convinces Knemon to agree to let the couple get married. Everyone involved controls enslaved servants, and these servants provide a lot of the comedy, while the richer people have the dramatic tension.

So who was Menander? Did you find out from this article? Let us know in the comments.

Learn by doing: what movies use a plot like this?
A Roman who translated Menander’s work: Plautus

Bibliography and further reading about Menander:

Plays and Fragments (Penguin Classics) by Menander. Translated by Norma Miller. The plays themselves.

Menander and the Making of Comedy, by J. Michael Walton and Peter D. Arnott (1996). Both authors are theater people more than classicists, so their study of Menander is very interested in how to produce his plays.

The Comedy of Menander: Convention, Variation, and Originality, by Netta Zagagi (1995).