What is papyrus? – Ancient Egypt 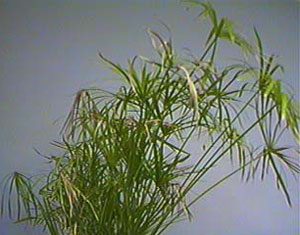 When the Egyptians began to write, about 3000 BC, they wrote from the beginning in ink, on papyrus (pah-PIE-russ). Papyrus is a plant that grows wild all over the Nile river valley, so it is very common in Egypt. You can cut the long papyrus stalks and soak them in water until they rot a little, and then you lay a lot of these stalks next to each other, and a lot of other stalks on top, crossways to the first ones, and then you pound them flat, until all the stalks get mashed into all the other ones, and you have something a lot like paper. 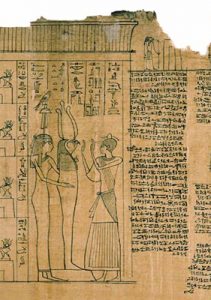 At first papyrus was only used in Egypt, but by about 1000 BC people all over West Asia began buying papyrus from Egypt and using it, since it was much more convenient than clay tablets (less breakable, and not as heavy!). People made papyrus in small sheets and then glued the sheets together to make big pieces. (a craft project?)

The Greeks and the Romans also used a lot of papyrus, all bought in Egypt because that is where papyrus grows. But it wasn’t cheap! One sheet of papyrus probably cost about what $20 is worth today. So when the Islamic empire learned how to make paper from rags from the Chinese about 700 AD, people quickly stopped using papyrus, even in Egypt. Instead of making papyrus, Egyptian factories started to make paper. (Another advantage of paper was that the ink soaked into it, instead of lying on top. So it was much harder to erase. Business people liked that it was harder to change a signed contract or receipt on paper than on papyrus.)

Learn by doing: making papyrus
Find out about parchment

Bibliography and further reading about papyrus: