Who is Aphrodite? Greek goddess 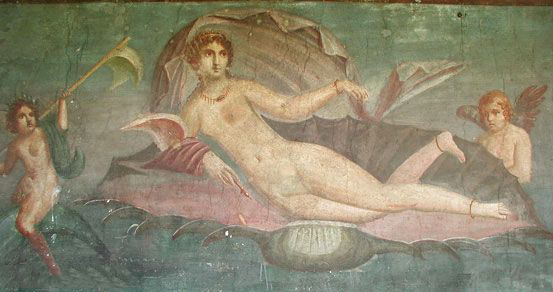 Birth of the goddess Aphrodite (from Pompeii, about 50 AD)

The goddess of love

In some stories, Aphrodite was born out of the sea foam and blood from when Zeus attacked Ouranos. She rose up out of the ocean on a sea-shell. The most famous story about Aphrodite is that she started the Trojan War.

Gaia and Ouranos
How did Aphrodite start a war?
More Greek gods
All our Ancient Greece articles

Aphrodite is a fertility goddess, like Demeter. But Demeter makes the earth grow grain, and Aphrodite makes women have babies. Aphrodite herself, however, does not have children.

Other myths about Aphrodite

Aphrodite had Ares for her boyfriend, and she was married to Hephaistos. When you’re a love goddess, you need more than one partner! She liked to encourage other women to get married too: it was Aphrodite who tricked Atalanta with the golden apples.

Who was Ares?
The god Hephaistos
Atalanta and the apples

The goddess Aphrodite in other cultures

Nobody is sure yet what the relationship is between Aphrodite and West Asian love goddesses like Astarte and Ishtar.

More about Astarte
And about Ishtar

Learn by doing: compare Aphrodite and Astarte and Lakshmi
More about the Roman goddess Venus

Bibliography and further reading about Aphrodite:

Aphrodite’s Blessing, by Clemence McLaren (2002). A feminist retelling of Greek myths about Aphrodite, for teenagers.

We Goddesses: Athena, Aphrodite, Hera by Doris Orgel and Marilee Heyer. With a feminist view.

Worshipping Aphrodite: Art and Cult in Classical Athens, by Rachel Rosenzweig (2004). By a specialist, for specialists.