Plot of the Trojan Women – Euripides 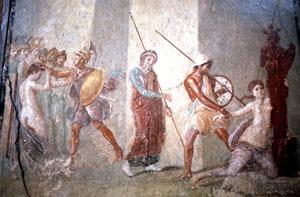 Cassandra dragged away from the altar (House of Menander, Pompeii, ca. 70 AD)

Euripides lived in ancient Athens. He wrote the Trojan Women in 415 BC during the Peloponnesian War. This was just after the Athenians had killed every man on the island of Melos, and enslaved all the women and children. The play is set right at the end of the Trojan War, after the events of the Iliad but before the Odyssey gets going.

The main characters of the Trojan Women are Hecuba (the widow of Priam, king of Troy), Cassandra (her daughter), Andromache (Hector’s widow), and Helen (Menelaus‘ wife). All of their husbands (well, one lover) have just been killed by the Greek soldiers. The Greek soldier Ajax has just raped Cassandra. The women are mourning their husbands and wondering what will happen to themselves and their children. A Greek messenger appears and tells Hecuba that she has to be Odysseus‘ slave. Cassandra has to be Agamemnon‘s slave. So the mother and daughter will be separated soon, probably forever. 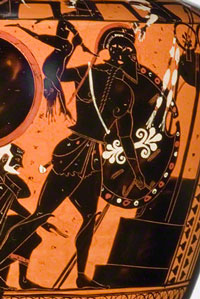 Next Andromache tells Hecuba and Cassandra some more bad news. Polyxena (Andromache’s daughter) has just been sacrificed – killed – on the tomb of Achilles. Andromache herself will be the slave of Achilles’ son Neoptolemos. And worse yet, the Greeks are planning to kill her baby son, Astyanax, to keep him from growing up to seek revenge on them.

That leaves Helen. Her husband, the Greek soldier Menelaus, arrives and threatens to kill her for running away with (or being kidnapped by) the Trojan prince Paris and starting this whole war. Helen begs for her life, and although Menelaus stands firm in the play, the audience knows from hearing the Odyssey that in the end he will take Helen back with him to Sparta.

Finally Greek soldiers carry little Astyanax in, dead. Andromache is already gone. So his grandmother, Hecuba, sadly gets his body ready for burial. Then she leaves for her new life of slavery.

Learn by doing: write a review of this play as if you were an Athenian who had fought on Melos.
More about Euripides: the Bacchae

Bibliography and further reading about Euripides: